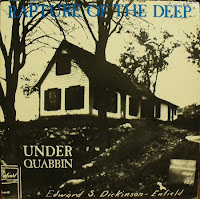 Given this was an Incas Records release, I was expecting a record chockablock with jangle.  You've heard the phrase "sight unseen?"  Well, I bought this "sound unheard" so to speak, and as often is the case in these scenarios, I was in store for something that deviated from said expectations.  Turns out Rapture of the Deep's specialty was typical synth/guitar rock of their era, leaning slightly left of center.  Under Quabbin isn't particularly dancey...or gothy...or cheesy, which is a relief considering that I spent the better part of twenty dollars on this.  The Massachusetts quartet's prime mover David Wildman. possesses a vocal timbre reminiscent of Peter Murphy, and to a lesser degree Steve Bays of Hot Hot Heat.  "Waiting" is by far my pick from the record, however the band cut a video for the leadoff track that you can view below.  Enjoy (or not).

Great surprise to hear this and more to see that you have a video ... and the others are classic sounds of the '80s. Excellent post Thanks

If you use the phrase "sight unseen" to mean you hadn't heard it that's an example of 'catachresis'. I only know that because Radiohead's Amnesiac special edition which was like a library book had a library card from 'Catachresis Library', and I looked it up.

These guys are form Massachusetts? Never heard of them. I had entered art school then and I would have been all over this. I've seen a lot of Boston bands, from rock to pop to goth, they escaped my radar.

Thanks for keeping this stuff alive
(I think). I'm still making music. My band is called The Unfamiliars (myspace.com/theunfamiliars) and if you are in the Boston area we are opening for Lou Barlow this thur sept 2 9pm at The Middle East Upstairs in Central Sq Cambridge

This one's more jangley and live at The Channel in Boston:
http://www.youtube.com/watch?v=YrboXDhswf8

hi friends , is possible return to download please ? thanks

Hello, please reupload. I used to own this record and I would love to hear it again. Thx.