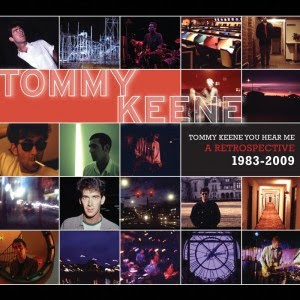 With three decades invested in a music career that has to date spawned roughly a dozen albums (counting b-sides and rarities comps), I’d say Tommy Keene is deserving of an anthology outlining his finer efforts, and fortunately that time has beckoned. You Hear Me, A Retrospective 1983-2009 is a double disk summary that clocks in at around 2 ½ hours boasting 41 tracks spanning his early ‘80s eps for Dolphin Records to his relatively high profile years on Geffen, and all the way up to his most recent studio venture, 2009’s In the Late Bright.

A jangle-meister to the Nth degree, Keene has always had a razor sharp panache when it comes to embellishing sweet chords with gritty distortion, and this robust formula has informed his songs seemingly from the first day he ever grasped a six-string (most likely a Rickenbacker).  Over the years he has not made any wholesale attempt to reinvent himself, and though his "if it ain't broke" strategy has yet to earn him chart domination or widespread cult status, time after time Tommy Keene delivers consistent records.  The veritable four albums worth of material that populate You Hear Me is chronologically sequenced, but it need not be considering our man's sonic palette and linear approach has deviated so minimally over the years.  The bulk of his better known songs are all present and accounted for - "Places That Are Gone," "Paper Words and Lies," "Run Now," and what is arguably his signature piece "Nothing Can Change You," which has even been covered by the Goo Goo Dolls.  There are several deep album cuts infiltrating this set as well, but not much in the way of previously unreleased material, save for a live take of "Long Time Missing" (the incisive leadoff track to 1998's Isolation Party), and an acoustic version of "Black and New York." Nevertheless, You Hear Me offers plenty of music that has been unavailable for years, and is an ideal launching pad for those that need to be acquainted with Keene's repertoire.

If it's TK rarities you're looking for however, there's still time to pre-order this collection directly from Second Motion Records, which will also entitle you to a a bonus digital collection of ten unreleased works (including live and demo material).
Posted by spavid at 4:54 PM

The acoustic "Black and White New York" is a stunner.

man, love this guy's records. even named my go nowhere recording project after my favorite record of his, The Isolation Party.

saw him in austin a while back. unfuckwithable. amazing guitar player. every bit as good live as he is recorded. it would be awesome if he and adam schmidt did more together.