Killjoys - Onenight and a Morningafter (1999, Shoreline) 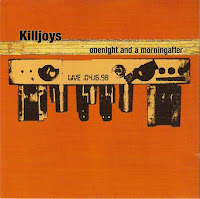 Over the course of 2009, I shared all three studio albums by the Ontario based Killjoys, a thoroughly ignored band in the States that was nonetheless responsible for some of the most irresistible punky power-pop of the '90s this side of the Lemonheads.  Taking into consideration that so many of you enjoyed the aforementioned LPs (Starry, Gimmie Five and Melos Modos), and since I need another day or three to tend to digitizing more vinyl, I decided to post the Killjoys final offering, a live album cut on April 16, 1998 at the Rivoli nightclub in Toronto. It contains songs from their entire catalog (albeit a brief one at that), and for those of you familiar with their studio recordings, it will come as little surprise that they're an equally if not more appealing proposition as a live act.   In addition to a dream setlist, Onenight and a Morningafter ironically closes things out with an unreleased studio cut, "Andy Roach."  In the sleeve notes, the band extols:  "Songs are like soliders.  You send them out to suffer scrutiny, praise or ridicule, to live or die, knowing there'll be more on the way."  But unless the Killjoys have the good sense and motivation to reunite, this disk will remain the final word.

Been lookin' for this one for awhile. Luv the Killjoys, Good job!

Could you re up the files please?

please reup this one. Many Thanks!