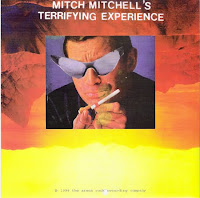 This is a followup to the Terrifying Experience single I posted here a little under a month ago, although on this vinyl pairing, Mitch Mitchell (of Guided By Voices renown) decided to expand the group's moniker by incorporating his own name into it.  All in the pursuit of marketability I suppose. No harm done.  On their side of the 45, Mitchell and Co. lead things off with the rugged, punky riff-roarer "Friday Night Fights," that is all too brief.  It's swiftly followed up by the droney, blues stomp of “Big City.” Adorning the flipside is a clangy slice of tuneful, yet meagerly recorded indie guitar rock, courtesy of one Illyah Kuryahkin (an assumed name for New York-based lo-fi dabbler Dean Wilson) that would do fans of early Monsterland and Belreve pretty damn well. It isn't clear if Wilson is currently making music (in a similar mold or otherwise), but you can investigate some of his other Clinton-era recordings, including Count No Count, over on Amazon.

As much of a GbV fan as I am, I have to say the Illyah Kuryahkin song wins big. It's a mind-blowing slice of otherworldly lo-fi My Bloody Valentine meets something exotic...love that weird clangy percussion and Dean's eerie, breathy voice. His two albums are also worth looking for (try Amazon mp3). Last anybody heard he was teaching at a university in Vietnam.

THANK YOU! Bought this when it came out mainly because of the GBV connection. But Illyah K really blew me away...this song in this version is one of my all time faves. Have not had a vinyl player for over 6 years so it was a welcome digital addition.

I/K's "Takin a Train" is excellent. Makes me wonder if anything on his albums can match it. I saw the teaching in Vietnam reference on his Myspace page, but thought it might have been a farce.

Sadly, I am clueless as to Lotus Pool.

Lotus Pool is IK's first 7" (have it but no player :( ). Lotus Pool along with Takin A Train were re-recorded for the second album in much weaker versions. The first album Count No Count is way up there with the singles...some really good stuff that has aged well.

any possibility you could repost this?