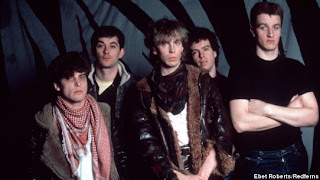 This week marks the release of a very tricked-out and vastly expanded deluxe edition (I'd say three CDs is sufficient) of the Teardrop Explodes seminal (in some corners anyway) debut, Kilimanjaro (yes the one with the zebras on the cover).  It's currently available only as an import sad to say, but I'd try Amazon in the UK for the quickest gratification and a more competitive price.  As for myself, I'm not in possession of a copy, and even if I were, I suspect Julian Cope and his accomplices wouldn't be to keen on me sharing it gratis.  Instead, I'm treating you to an FM broadcast of a 1981 Teardrop Explodes show recorded on their first American trek.  Kilimanjaro had been out for a good year or so, and as such many classics-to-be make an obligatory appearance in the set, but the Mt. Vernon crowd also got a preview of the band's next album, Wilder.  "Treason," "Sleeping Gas," and "When I Dream" are all present and accounted for, and save for some slight radio static here and there the sound is impeccable.

Thanks for this! Always glad to have more live Teardrop Explodes, but can't quite bring myself to plunk down for that 3 cd set of Kilimanjaro. With the Peel Sessions released now, and all the singles and b-sides collected on various comps, I'm not sure there's much new here. Or am I missing something?

Some of the b-sides were already collected on a T/E cd called Piano which I posted awhile ago here:

As a result of the reissue I may be taking it down soon. As for the Peel sessions, I'm sure they've appeared in other places as well, so yes, I have exactly the same reservations as you do.

Thanks so much for this! Can't wait to hear it. I just wrote a feature on the origins of The Teardrop Explodes band name if you'd like to take a look - http://thequietus.com/articles/09596-the-teardrop-explodes . I got to talk to everyone involved (except Cope, unfortunately), even Gerry Conway, who wrote the Daredevil issue they found the name in.

Hi could you please repost this? thanks!

I was listening to this every other day on youtube. Nothing short of incredible. Unfortunately it's no longer available. A repost would be greatly appreciated ... Will go down on it.

I was listening to this every other day on youtube. Nothing short of incredible. Unfortunately it's no longer available. A repost would be greatly appreciated ... Will go down on it.

so many thanks! after listening to this it's hard to go back to the recordings . That bass tone, the live aggression, jcs on and off pitch. Its just a bit special. Stoked to have a copy.

The link is dead, any chance of another re-post?