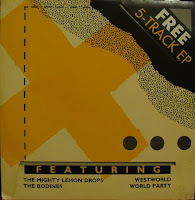 I'm not really sure if this one has a proper title or not, but when I was flipping through some choice vinyl at a local secondhand record dispensary a couple names on the front sleeve of this compilation screamed out to me, namely The Mighty Lemon Drops and The Bodines. two key figures in the British C86 indie, jangle rock movement that I can't seem to get enough, even some 24 years after the fact.  Both groups originally appeared on the NME magazine C86 cassette compilation, and they are united once again on this wax.  The live version of the Lemon Drops "Take Me Up" may very well be exclusive to this disk, and following suit the Bodines give us a concert variation of "Back Door," a track culled from their Played LP, which really could really use a reissue.  World Party, the muse of former Waterboy Karl Wallinger contribute an organ-driven slice of psyche revivalism, "World Groove," which I believe eventually ended up as a b-side on one of the Private Revolution singles.  In regards to Westworld, who lead this whole thing off, if you can't say anything nice...

From what little I'm able to glean about this mysterious compilation, it was given away free with "RM" magazine.  Feel free to make any corrections in the comments.

I have had this for 25+ years, bought used even then at a record shop, separated from whatever zine it came with. Found it odd at the time that there was a "Bodines" and a "BoDeans," and completely different soundwise. Bought it for the Mighty Lemon Drops tunes, and was turned on to World Party in the process. Nice to have it digitally. Thanks.

This would have originally come with Record Mirror magazine. I have another with a very similar looking sleeve.

Looks like the magazine mystery is solved. Never would have guessed. Thanks.

Recently found this very record in a box of vinyl LP's I bought cheaply at a boot sale, but I hadn't played it yet.
It came on a 12", where most of these Record Mirror comps were usually a 7" sellotaped to the cover.

YOU SUCK! the mighty lemon drops track are CORRUPT!