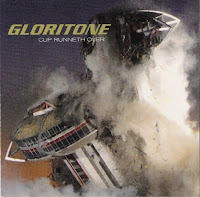 I throw the term "left of the dial" around a little too much, so here's an album that runs a bit contrary.  This rather pummeling power trio were gestated in the mid-90s in the parched desert sands of Tempe, AZ, and with their airwaves-ready debut, Cup Runneth Over being co-opted by the likes of RCA Records, you 'd think Gloritone might have gained a sizable toehold.  Not. Taking a more traditional (albeit LOUD) rawk-n-roll route, Gloritone didn't sound out of place amongst the Foo Fighters, Fig Dish, and to a lesser extent Summercamp.  Cup Runneth Over doles out the hooks in colossal grandeur, packing more melody into keepers like "John Wayne," "9 Summers," and "Cut My Heart" than many of their peers' entire albums.  Bitchin' stuff folks.  At any rate, the album came and went, as did their tenure with RCA, but a follow-up, Fainter Farther Still appeared in 2001, and is available in ones and zeros from iTunes and Amazon, as well as physically from the latter.  Get it.