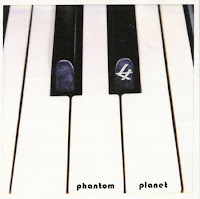 I've wanted to do a Phantom Planet post almost as long as I've been blogging, but since just about everything they've committed to tape is still available, I restrained myself from doing so...until I remembered Polaroid, a CD sold exclusively through their now defunct fan club. Polaroid was a clearinghouse of sorts for outtakes from their 1998 debut, Phantom Plant is Missing, and other shelved recordings from the mid to late '90s. For a lot of folks, myself included, P/P peaked with their quantum leap of a sophomore album, The Guest, which came down the pike some four years later. That being said, what I really wanted to do was share two subsequent Phantom Planet outtake disks, Negatives and Negatives 2, which contained roughly 40 songs between the two of them that were more contemporary to their '00s albums, but their availability from digital retailers (iTunes, Emusic) made that too much of a risky proposition, so in their place I leave you with Polaroid, which in itself contains about two albums worth of material, including early versions of "Recently Distressed" and "So I Fall Again." If the fact that Phantom Planet's signature song, "California," adopted as the theme for The O.C. , has scared you off all these years don't knock them until you've acquainted yourself with some of their albums, especially The Guest and ...Missing, though Polaroid isn't a bad place to start either.

Wow, thanks a lot man. I have been trying to get this for a long time.

How did I miss the first time around!?!

anyway to post this link again? i need to get my hands on this!