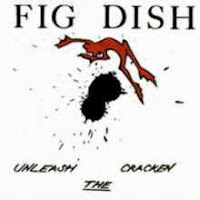 This is kind of an obvious tie-in with the new remake of Clash of the Titans hitting the big screen this weekend, though the only thing this ancient Fig Dish album and the movie have in common is the famous one-liner. I have reservations in sharing this disk, given the band is rumored to be a little ashamed of it, so if anyone has a problem, shoot me an email (click my profile). Most Fig Dish fans latched onto the group via their 1995 major label LP, That's What Love Songs Often Do, chockablock with hook-laden, hard rock scorchers like "Seeds" and "Rollover, Please" (the latter song originally appeared on a single in a different incarnation, which I posted a couple years ago right here). Cracken is very much a respectable Fig Dish album, albeit it's a kinder, gentler F/D, a la say It's A Shame About Ray-era Lemonheads. Contrary to the what I just rattled off, there are a couple songs here, specifically "Birthday Clowns" and "Pretty Karen Record," that crank just as mightily as their more seasoned offerings. I dunno. Make what you will of Unleash the Cracken. Their definitive album it's not, but if you ask me this is an above average springboard release. BTW, I don't possess an original copy of this, so thanks once again anonymous peer-to-peer sharer on Soulseek.

I found this CD at a record show eons ago. After listening to it I swore it had to be a different band. Been a long time since I played it, perhaps I'll give it another spin and see

Hello,
thanks for all the reposts.
Can you also, please, repost this CD?

Just a shot in the dark, but is there any chance of getting a new download link to the Unleash the Kracken album? Unfortunately I found this post after the link had expired and I'd love to check this out!

What label is this CD on?