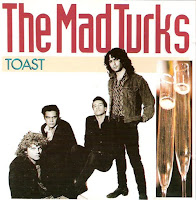 This is a followup to my recent share of the Mad Turks From Istanbul's phenomenal debut LP, Café Istanbul. There was a three year layover between that album and this sophomore successor, and in the intervening years, the group truncated their name to simply, The Mad Turks, and lost original guitarist Hank M. Turk (actual moniker Matthias Eckhardt - thank you Encyclopedia of Australian Rock and Pop). The aforementioned Café possessed a walloping, visceral urgency that this album is somewhat deficient in, but the band's progression is at the very least logical, if not a bit too straight laced for their own good. Nevertheless, Toast succeeds with a handful of poignantly sprite moments, namely "Bloodmoney," "Left the Right," and "Tempers Fire" that adequately rekindle some of the Turks early fervor. After the band itself was "toast," various members evolved into an equally respectable power pop troupe, The Icecream Hands, noted in the comments to this post, as well as in a thorough and must read article on Noise For Heroes. Big thanks to Kouzie for furnishing me with the artwork.

I would LOVE to get hold of any Mad Turks stuff you have if you would be kind enough to repost it!

Just updated the link for this and Cafe Istanbul.

Link has been fixed (again).

I feel quite sure that I once downloaded Cafe Istanbul from your great site, but I must have had my ears on loan at that time because I didn't keep it. Recently having heard another mention I checked out someone else's offer of that CD and I really, really liked it.

So, if you are able when you have the chance could you please re-up Toast, and while you are at it it's also probably worth doing the same for Cafe Istanbul.