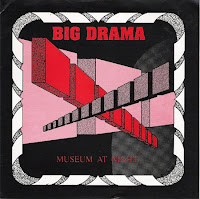 Over the years Ebay has become an increasingly fertile destination for discovering bands of yesteryear, at least as far as I'm concerned. For example, a genre search of "power pop" yielded this Big Drama 7" that I might have been oblivious to otherwise. At any rate, I don't have an abundance of background info to offer on this Iowa City, IA four-piece, whose discography may begin and end with this very single. Spearheaded by mouthpiece/guitarist John Svec, the group's recipe of ringing chords and left of the dial aesthetics is a familiar but highly effective one. In the credits, they thank a couple of hometown contemporaries (Full Fathom Five and the Dangtrippers) who just so happen to have prior entries on this blog. Can't decide on a favorite for this single. Hope ya like.

A. Weathervane
B1. Museum at Night
B2. All Up to You