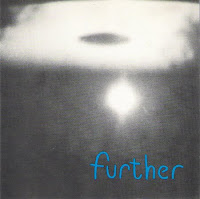 Recently had a request for this long overlooked mid-90s artifact. I shared a further ep way back in '07 called Golden Grimes, that's still available for the taking. Consisting of Darren and Brent Rademaker, once of major label flunkies Shadowland, further was something of a 180 degree reaction to that regrettable endeavor. After imbibing an overdose of SST-era Dino Jr, Sentridoh, and perhaps a swig or two of Polvo, Darren and Brent decided to extend their spin on mid-fi indie rawk to a rather indifferent public, save for a few college radio djs and fanzine scribes. Sometimes Chimes, their second and final proper LP, was by far and away their lengthiest release, clocking in at over an hour with two-dozen plus selections of clangly noise pop. If you ever wondered what the "bridge" between post-Bug Dinosaur Jr and Lou Barlow's fully realized vision of Sebadoh (circa Bubble and Scrape) would amount to, Chimes will give you a fairly spot on idea. It features some of their finest moments, including "She Lives By the Castle 2," "Generic 7," and a cover of Unrest's "Isabel." Look for more further to come on Wilfully Obscure.

I already have this but thank you for reminding me to listen to 'em again. None of my friends understood what I saw In these guys (mid 90's). I'm listening to The Summer Hits "Beaches and Canyons" in memoriam.

Heh, Furtherdoh Jr. Should the Q be as obvious?

Can you please re-upload this?? It says it got deleted!

THANKS, best damn blog ever

Could this be updated? The link has expired

Any chance of the Further re-ups? Hard to find this stuff. Really love the blog. Keep up the solid work (for many years).