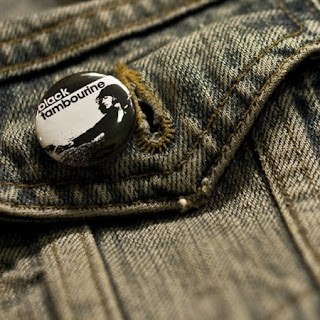 To this day I still argue that mix tapes trump mix cds, if only for one empirical fact - a blank cassette is 90 to 100 minutes long, while a cd-r maxes out at a mere 80. Back in the day, even if you weren't making a mix tape per se, and were just recording a straight album to each side, there was always the tricky little matter of what to do with the unused remainder of tape (if any was left to begin with that is). If you were anything like me and my friends, there was an unspoken practice of taking advantage of that extra blank five to ten minutes of tape and filling it out with more music, even if it wasn't exactly pertinent to the "main course" so to speak. Some 16 years or so ago, when a friend was kind of enough to share a pre-release of a Velocity Girl album on a 100 minute, high bias TDK cartridge, he had the smarts to flesh out the few remaining minutes with a couple of songs from a related band called Black Tambourine. Given that Black Tambourine was a female fronted quartet, my first assumption was that Sarah Shannon of Velocity Girl was involved. Not true. In fact the vocalist was none other than one Pam Berry, who was accompanied by two future V/G alumni, Archie Moore and Brain Nelson (and another guy, Mike Schulman who released Black Tambourine's singles on the very label that's reissuing them, for the second time I might add).


Recorded over a two year span, B/T's slim body of work nevertheless proved to be influential. Setting up shop in the metro D.C. environs circa 1989, it was clear from the start that Pam Berry and Co, were indie Anglophiles to the hilt, who surely got a lot of mileage out of their 4AD Records imports. Dangling from a Mary Chain of feedback and wielding a bevy of C-86 and Brit-psyche influences, Black Tambourine were a few minutes ahead of the shoegazer express that was on the verge of enrapturing both sides of the pond. I'll go out on a limb and suggest that the band Lush usurped a thing or two from Tambourine (though it must have been fairly simultaneous). The quartet's robust sonic backdrop was tempered by Berry's slight, dare I say mildly disconnected vocal aplomb, which largely blended in as an instrument unto itself. Meager as their ten-song discography was (drawn from only two singles and a handful of compilations) B/T possessed some indelibly genius moments like "Throw Aggi Off the Bridge," which would became their de facto signature song. "Black Car" was nearly as affecting and sublime. The original Black Tambourine collection, Complete Recordings, came out in 1999 and was designed to be the final word on the band, but for better or worse, it wasn't. Fast forward another ten years to find a "trans-Atlantic" Tambourine reunion for the purpose of recording four songs (two originals/two covers) to include as bonus material for 2010s definitive release, Black Tambourine, which also tacks on early demos of "Throw Aggi..." and "For Ex-Lovers Only." An extra six tracks in all alongside the original ten. As I've already emphasized, B/T's recorded legacy may have been as minimal as it gets, but in post-mortem, thoroughly crucial.
Posted by spavid at 5:18 PM

nice post and thanx for the link my friend.

"Throw Aggi Off The Bridge" is weep-makingly beautiful. Stone classic.

Did I make you that tape?

Damn. Been looking for this.

Sorry to see this has been blocked by Rapidshare. Was given the ok by Mike from Slumberland, so I'll see what I can do.