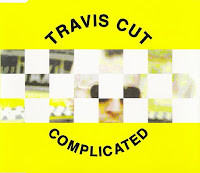 If you're one to partake in such bygone British punk-pop groups like Mega City Four, The Senseless Things, Midway Still, Snuff, and even Ned's Atomic Dustbin you may already be familiar with Travis Cut. Doling out four albums and a bevy of singles and eps throughout much of the '90s and beyond, this caffeinated three-piece had a knack for speedy, melodic tuneage, and this 1997 ep is sure to make for a fine introduction. These four tracks are also available on a Travis Cut singles compilation, Another Day Another Drummer, which might still be available here. Word is the band has reconvened and aims to release an album in the near future.

I absolutely love MC4 and Senseless Things but somehow managed to miss these guys. Do you have any of their albums?

I have a Senseless Things album up:

reminds me of China Drum