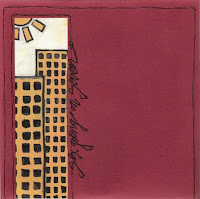 Thought this would be an appropriate prelude to what I plan on sharing tomorrow, but I shan't give any more clues as to what that will entail. Six Going on Seven were one of hundreds of respectable indie/emo outfits that were relegated to basement gigs and the like, back in the mid '90s when the genre had yet to be usurped by mainstream radio outlets and properly "marketed" (i.e. exploited). This is somewhat reminiscent of post-hardcore stalwarts of the era, Garden Variety, particularly the b-side "New Faith in Loss," while "Method Acting" veers more towards early Jimmy Eat World and Promise Ring. Though I gave it a fair shake at the time, I wasn't a convert to Six Going on Seven's Heartbreak's Got Backbeat album. Dare I say they peaked on this single? Sweet die-cut sleeve on this one too.

A. Method Actor
B. New Faith in Loss

It might be due to the fact that I watched this band develop in a live setting, but i think they peaked with the "heartbreak's got backbeat" LP. It wouldn't hurt take another listen. I considered quitting playing music after watching them open for Seaweed around that time. Yeah, they were that good...

any chance someone could upload the LPs? Been craving them recently.

Sorry, but I don't have any full lengths by them.