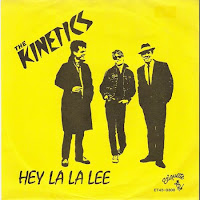 They're on the same label as the Sonics, they're decked out in mod/2 Tone attire, and their best song is on par with UB40? Kind of. The Kinetics were IMO an enigmatic trio, apparently hailing from the Pacific Northwest, who released an LP, Snake Dance around the same time as this single. They nail it big time on "Hey La La Lee," an addictive slice of blue-eyed reggae pop, wrapped up in a minimalist construct, none too dissimilar to UB40 as I noted above, or for that matter Vampire Weekend. It definitely exudes the temperament of a lost classic. "Take a Train" is more reliant on power chords, but not particularly garagey or mod as their cover snapshot might suggest. Enjoy (or not).

I could not find this "Hey La La Lee" single to play, but it's something I want to try and find.

Hello,
can you, please, repost this 7''?
Thank you very much
Stathis