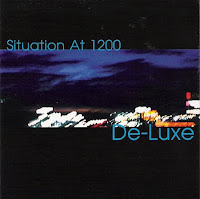 I caught this New Jersey four-piece live in the act when they were opening for Braid and Jejune in 1999 (or was it 2000?). In fact, I still have my Jejune t-shirt from that gig, but I digress. Let's see, what can I tell you about Situation at 1200? The De-Luxe ep may have been their only formal release, though I also have a demo tape, and mp3s of even more demos and such. This is one band that was not likely to have shied away from the emo tag, and in fact they probably quite embraced it. Scott Shields' strained vocal maneuvers could strike maudlin heights, but his (sometimes) achingly apparent tone-deafness was compensated by sheer enthusiasm and earnestness. A little wet behind the ears for sure, but that's what added oodles to the charm and persuasion of Situation at 1200.

other really good your best guess releases: You & I "Within the Frame", Rocky Votolato's "A Brief History" & try.fail.try's "we deal in lives"

Wow. I lost this disc in a crack head smash and grab on my jeep years ago and have had zero luck finding it, hard copy or internet. I even tracked down one of the guys from the band and he said he would send me all the stuff, but he never did.

Glad I could help. It's good stuff.

OUCH! (But thanks for posting this anyway.)

liked this EP! one of the CDs i always played in my bedroom.

any chance to reupload this ep back? thanks in advance!