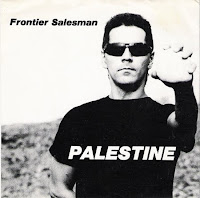 I'm afraid I don't have a smidgen of biographical info to dispense regarding this Albany, NY duo, but then again that's the case withe half the bands featured in the Singles Going Single series, isn't it? Pensive, sinewy indie-rock is the flavor du jour here, with Frontier Salesman's Marc Jones riffing on the then ongoing, and for that matter still ongoing conflict in the Middle East, on the a-side of this single. The liner notes on the back sleeve read like something akin to a disclaimer to prevent any misconceptions, but as for the song ("Palestine") itself, it's not particularly incendiary. The other side of the coin, "Not the Center of Town" is propelled by a gnarly, post-punk guitar line that admittedly sounds a little dated some 21 years after the fact, but still pretty gratifying.