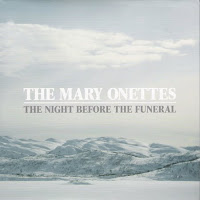 In theory, Record Store Day is nothing short of a phenomenal idea. Increase traffic to indie record shops (ever dwindling sadly) via in-store performances, and even more enticingly, the release of hundreds of limited edition records and CDs by in-demand and up and coming artists. In practice unfortunately, too many RSD releases this year (and just as much in 2009) were issued in ridiculously sparse quantities like this Mary Onettes single, containing two exclusive tracks which saw a worldwide run of a scant 500 copies! From what I understand that statistic is no exaggeration. In the end, who really wins with kind of sales model, aside from Ebay opportunists? I'm sure the label and band barely recouped their recording and sleeve design costs, meanwhile thousands of would be customers and dedicated fans left stores without this commendable 45. I consider myself damn lucky to have obtained one myself, which is why I felt obligated to share it with you. The Onettes are a Swedish quartet who do a deftly remarkable job of retooling the icy sonic aesthetics of classic Echo and the Bunnymen, early-New Order, and for that matter even a little Cure for good measure, into something all to themselves. These two songs are presumably leftovers from their recent Islands LP, also on Labrador Records, but their self titled debut from 2007 was even more of a revelation, at least to my ears. BTW, last week the Onettes had to scrap their entire US tour due to inclimate travel conditions caused by the Icelandic volcano situation.

A. The Night Before the Funeral
B. The Benefits of Being Young

Not enough words to express my gratitude.

Gratitude seconded! I do agree that the 2007 LP does more for me than Islands, although I like them both.

I'd love to hear this too.

I know re-ups are (probably) a pain. I found this (sort of) on this "area 57 corazon" blog..but the second track is mega-damaged. It sounds like digital fury. satan clamoring for your soul near the end. angry 1's and 0's!

for this blog. one of the greatest.