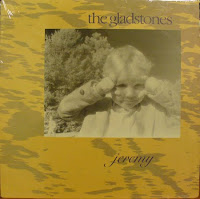 What little has been spoken of Lincoln, NE's Gladstones is the band's connection to local contemporaries, For Against. Initially dubbed Playground, when the Gladstones were put to pasture in the early '90s, guitarist Stephen Hinrichs eventually migrated to For Against, joining Jeffery Runnings and Co. for four of the groups most effortlessly pristine albums, Aperture (1993), Mason's California Lunchroom (1995), Shelf Life (1997) and Coalesced (2002). Hinrichs' sublimely chiming chords that utterly defined those flawless records were already in fine form during his Gladstones tenure, as evidenced wherever you queue the needle on Jeremy, their lone album. A tad less austere than For Against, the Gladstones nevertheless indulged their flair for atmospheric indie pop and heightened melodic structures. "Mary I," "Top of the World" and "Hurting In," are quite frankly far beyond excellent, making Jeremy every bit as recommendable as the aforementioned For Against albums I just rattled off. This is an absolutely stunning find, but you'd hardly go away with that opinion if you read Trouser Press' assessment of the album before hearing it for yourself:


This Nebraska quartet offers the exact elements that people who used the term "college rock" as a pejorative by the mid-to-late-'80s were thinking of: jangly, arpeggiated guitar lines lifted directly from Murmur, a hint of Morrissey in the vocals, a toothless rhythm section. The Gladstones are painfully earnest even at their most obtuse, and their material sounds like songs the Connells threw away because they weren't catchy enough. They occasionally come up with a neat atmospheric bit, like the vocal harmonies on "Garden," but the material is so slight that it absolutely disappears when the tone arm moves back to the rest position. The fact that they were peddling this long-since-clichéd sound as late as 1990 is probably at the top of the fairly long list of reasons they were ignored.
An amusing argument I suppose, but an inaccurate and delusionary one at best. I think you'll agree on first listen, there's no reason not to love the Gladstones. Bon appetit.
01. Garden
02. Oludvai
03. Energy
04. Top of the World
05. Ten Times a Minute
06. Mary I
07. Hurting In
08. Gallery Key
09. Horns of a Dilemma

Fantastic album. Many thanks for this unknown gem!

Hey, listened to it. To me not as good as For Against, but worth checking out. That reviewer from Trouser Press must have woken up on the wrong side of the bed.

I randomly decided to Google my dad's band from the eighties/early nineties today, and this article was the first to pop up. My dad, Jonathan Baker, was the lead vocalist for The Gladstones and I love his music! I'm glad someone else out there appreciates it. :)

this album is great.
it is realy great!

thanx for this link!

Where can I get this album? I have been looking for it since 1990.

I personally think the songs "Olduavi" and "Ten Times a Minute" are the best songs. So good.

Fantastic record. I hear a bit of Flying Nun in it. Thanks for sharing!

please kindly fix the link..looking for this album..thanks in advance..

Thanks so much for posting about this album. Was wondering if there was any way you could update the link? I'd love to download this for myself. Thank you!