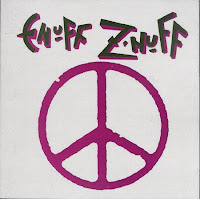 They say perception is reality, and nowhere was that notion more tragically applicable than with '80s glam rock/metal. Something tells me that when the suits pressed the four fellows in Chicago's vastly misunderstood Enuff Z' Nuff to don mascara and spandex for MTV, the band must have been crying a collective river inside. Their 1989 self-titled disk (the one with the peacenik motif that I cleverly inverted the hue of above) went gold, propelled by a pair of irresistible singles, "New Thing," and "Fly High Michelle." Much like the baby with the bath water, Enuff Z' Nuff was quickly disposed of alongside the hair-farmer contingent as a whole by mainstream ears come the early '90s. It was an image the band never quite shook despite their Herculean efforts over the following decades to eschew their poseur transgressions. Yet those of us who were open minded enough to consider the fairly enlightening 1985 collection of early, unreleased studio recordings, issued by Big Deal Records in 1994, discovered that our suspicions had been confirmed - Enuff Z' Nuff, though by no means purists, belied a power-pop pedigree underneath those layers of gaudy surface makeup and Aqua Net.

This collection of rather raw, cassette-sourced demos for that fabled first album gives further credence to the band's hidden credibility. True, you'll find your fair share of wailing guitar solos among these songs, but nevertheless, Enuff demonstrably bowed to the alter of Cheap Trick, not Bon Jovi. The early versions of album-to-be cuts, "Little Indian Angel" and the ultra infectious Strength single, "Baby Loves You," are at least a little more organic in their initial frameworks. Quite a few completely unreleased compositions here as well, including "Backstreet Kids," and a commendable reading of "Dear Prudence." Enjoy (or not).

The link for this one is dead. If there is any chance of a re-up, it would be greatly appreciated! Thank you.