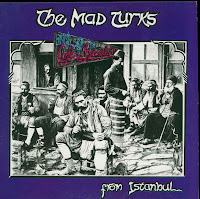 Damn. Where has this album been my whole life? A couple months ago when I posted the Bad Timing Perth, Australia retrospective compilation, I name dropped a band that I could have sworn hailed from Perth, but actually didn't. The group in question was the Spliffs, an '80s jangle outfit in the mold of the Someloves that I unfortunately discovered way too after the fact. I did some poking around on Google to satisfy my Spliffs jones, and in the process learned of one of their contemporaries, The Mad Turks From Istanbul, or more commonly referred to as simply the Mad Turks. Originally based in Adelaide, and eventually migrating to Melbourne, the Turks would parley themselves into the Ice Cream Hands by the early '90s, though neither achieved mainstream notoriety.


Their debut, Café Istanbul is something of a revelation, though it doesn't sound far removed from such period acts as the Smithereens, Close Lobsters, and their own countrymen the Hoodoo Gurus and the Ups and Downs. Monstrous, gargantuan hooks, hard strummed Rickenbacker chords, and brisk tempos eminently define the dozen aces ensconced within this powerhouse of a record. "Under Review," "Chances Lane," and "Honestly Rita" all brandish an utterly timeless power-pop panache that parallel the work of any of the aforementioned. A second album, Toast was issued in 1990, and though I have not had the privilege of hearing it, one needs no further convincing of the Turks talent than Café Istanbul. The online "branch" of the South Australia State Library (linked above) provides further biographical info, a full discography, plus 30 second samples of this LP and some of the Turks singles. A great article on the group and their segue into the Ice Cream Hands can be read over at the venerable Noise for Heroes website.

This is great. I've never heard this one, but I do have Toast already ripped (256). Let me know where I can send a download link.

hey spavid this is awesome, man!! great great stuff and scarce if i may!! thank you thank you!! i love your blog!!

A luck would have it, I found MP3s in 224 kbps of the album on one of my peer-to-peer platforms, but is yours sourced from CD or vinyl? I could definitely use the artwork if you can supply it. If so, please send it to me via email (my email addy is in my profile). Thanks so much!

Have you heard the Ice Cream Hands? Their album Sweeter Than The Radio is one of the great unrecognized pop albums of the '90s. Lemme know if you don't have it and I'll put it up on slsk for you. Also got a couple of great radio sessions from them that you may be interested in....

You are a champ for posting this classic Australian album. I've not gotten round to digitising my vinyl and this has saved me a lot of trouble.

Having grown up in Adelaide, I was privileged to see the Turks play and the live shows had that same urgency that Toast unfortunately never lived up to.

Love this album! We saw them as they started through the Uni days and recall heaps of gigs through the 2 albums. I have all their tunes including b-sides as mp3s. (First album from vinyl as I don't think it made CD). So if you're keen let me know and I'll put them up for download.
Ade
ade@pogo3.com

Love this album! We saw them as they started through the Uni days and recall heaps of gigs through the 2 albums. I have all their tunes including b-sides as mp3s. (First album from vinyl as I don't think it made CD). So if you're keen let me know and I'll put them up for download.
Ade
ade@pogo3.com

Yep - utterly brilliant band and album (Cafe Istanbul) with one of my favourite lines: "the oven hasn't worked since the day I put my head inside" from "Holding my Breath"!
I remember seeing them for the first time in abgout 86 or 87 with the Exploding White Mice. The Mice rocked more but the Turks had better songs.
"Chucks" latest solo offering is great - he is one of this countries most underappreciated songwriters.

Yep - brilliant band and album in "Cafe Istanbul" with one of the best lines - "the oven hasn't worked since the day I put my head inside" from "Holding my breath"!
Saw them for the 1st time with the Exploding White Mice (possibly Adelaide Uni?) and followed them both for years. The Mice were more rocking but the Turks hadbetter songs thanks to the talents of "Chuck".
His latest solo offering is great - "Walk this ocean". He's one of Australias most under-rated song writers.

link has been updated

thanks for posting this great band