The Soup Dragons - The Sun Is in the Sky ep (1986, Subway Organization) 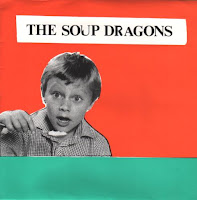 It was 1991 or thereabouts, and Scotland's Soup Dragons had brewed up a colossal hit with their acid-house reconfiguration of the Rolling Stones "I Feel Free"....and I could give a rats ass. In fact when they quietly disappeared a few years later (along with the rest of the Madchester scene), I'm sure I was subconciously delighted they were off the radar. That was until the mid-90s when I had read in more than a few places that early in their career, the Soup Dragons more or less aped The Buzzcocks.


Hmmm. Being the Buzzcocks fan I was/still am, I decided to do some investigating, within budget mind you. I found a tape of their full-length debut This Is Our Art. Hardly the stuff of Pete Shelley and Steve Diggle, but at least the breakbeats and wah-wah hadn't kicked in yet. I delved a little deeper and investigated their Hang Ten! release, a cobbled together collection of early ep tracks. I was getting a little warmer, but if anything the material on Hang Ten! (some claim this to be their strongest release, btw) was a loose afterthought of the just passed C86 indie pop phenom. It wasn't until the last couple years that I learned of the Soup Dragons pre-Hang Ten! ep, The Sun Is in the Sky. Bingo - or as close as I would come to what I had been pining for anyway. The slightly off-kilter tenor inhabiting "Swirling Round The Garden With You" and "Fair's Fair" did indeed pack some serious crunch, but not so much the firepower I had anticipated. At any rate The Sun... is a fun, respectable DIY record, and a motif that for better or worse, the Soup Dragons would quickly abandon.
01. Quite Content
02. Swirling Round The Garden With You
03. Fair's Fair
04. Not For Humbert
https://www90.zippyshare.com/v/OsxTS1zC/file.html
Posted by spavid at 6:22 PM

Different take on the Soup Dragons

I first heard "This is Our Art" (when it came out) - Dull, Dull, Dull. Then I rented the Hang Ten(yes rent-a-record was once a reality )and loved it (at least the first 3/4). A few years later the record store where I worked and had to play very bad music got a play cassingle of "I'm Free". I welcomed it as a passably enjoyable bit of Madchester bandwagoning.

I sent for this, mail order only, but it never came. (Well, not me personally, to be fair...)

MMMMMMMMMMM...... me thinks 45 revolutions is a pooh sticks fan!

Just occurred to me, this didnt get released by subway as they went bust before it was due to come out, was released mail order only & they ripped a load of people off! The best thing they did was the first single, "whole wide world". E-mail me @ markiered@msn.com & i`ll email u the tracks if u ain`t got them

Holy moly! Been looking for this for YEARS! Now I've found it, it's on Rapidshare, which never lets me download a thing! Any chance you can up this to somewhere else?