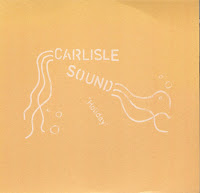 If it weren't for in-store listening booths, this 45 would not have made it to my blog, so a big thanks to Last Vestige in Albany. Carlisle Sound are/were a fine Cambridge, MA quartet who's discography may in fact be limited to this split single. Kind of a shame if that's in fact the case, because on "Holiday" they make good use of incessantly ringing fretwork a la such C86 inspired combos as The Close Lobsters and Dentists, while managing not to sound like a wholesale throwback in the process. I suggest they were a fine band on the basis of their neglected Myspace page, which happens to mention:


"The melody's in the music...and we're not gonna lose it." Carlisle Sound began in 2001 at 6 1/2 Carlisle St. Cambridge, MA. Every member of the groop plays in another band that is far more popular than the Sound. Andrew the drummer owns Pants Yell!, Rocco's got Reports, Alex rides the Ponies in the Surf, and Casey is a current member of Major Stars. 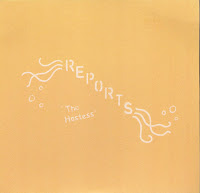 The Reports, as name dropped in the little factoid above, grace the other side of this wax. Tough they would become more prolific than Carlisle Sound, "The Hostess" is merely ok slacker indie-rawk, noisy at the beginning, hushed towards the end, and moreover, too non-descript and ineffectual. You can check out a handful of much more proficient Reports tunes on their Myspace page. BTW, since this single appears to still be available through Paper Cities Records, I'm only going to leave this up for a few days. If you like what you hear, you know the drill.

Reports now have a 7" out on Cambridge label Ride the Snake: http://humpypuzzlepieces.blogspot.com/2009/06/reports.html (posted with permission).