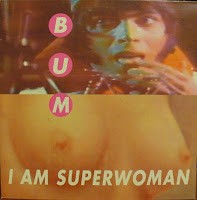 Ok, thought I’d follow up my Bum singles post with a couple of hard to find and way out of print albums. If you read my previous screed, I championed Bum’s debut long-player Wanna Smash Sensation in a big way. Well, here are the two albums that followed in Wanna Smash's sadly ignored wake. I Am Superwoman, released by Munster Records in 1994, essentially charts Bum’s fairly smooth transition from hook-savvy pop-punks to something a little more garagey. “I Wanna Be,” an impressive single side, is redone here, as well as “Bent on Being Bent,” originally on Wanna Smash, but appearing here minus the trumpets and car horns. Most of Superwoman’s knockout punches occur on the first side. The album actually made it to CD, but this rip was taken from a sparkling clean vinyl copy, the more available of the two formats from what I recall. 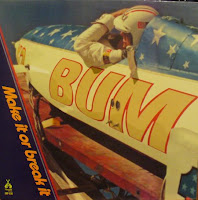 By the time they got around to Make It or Break It, Bum were a far different sounding animal. An eight-song mini-album (vinyl-only from what I can tell), Make It... is a grower, with perhaps only the lead-off track, “O Cookie” resembling those early singles I so revere. A prime example of Bum’s renovated modus operandi is “The Right On Girl,” a throwback to early ‘60s jukebox ballads. As for the “garage” quotient, that’s best evidenced by Make It’s four covers, including a run through the Flamin’ Groovies “Headin’ For the Texas Border,” and “Savage,” originally penned by the decidedly more obscure Fun Things, a late ‘70s Aussie combo that you can investigate by clicking the hyper-link.
I Am Superwoman
01. Your Name Was Next to Mine
02. I Wanna Be
03. Weekend
04. Bent on Being Bent
05. 1983
06. Got Yourself Together
07. Don’t Come Close to Me
08. Raped and Freezing
09. Oh No
10. My Pal

Neither of these is really a proper follow-up to the early singles or "Wanna Smash Sensation" but some of the songs like O Cookie and Outta Tune are excellent.