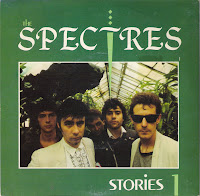 Earlier this year, some of you may recall my share of the Rich Kids Burning Sounds CD of demos and outtakes. Rich Kids of course were a British post-punk quartet who’s lineup featuring Midge Ure (pre-Ultravox) and Glen Matlock (former Sex Pistol) seemed to be more heralded than the music contained on their lone LP, Ghosts of Princes in Towers. Turns out when I was doing some fact checking on the Rich Kids, it came to my attention there was yet another outfit from a similar period that Matlock was not only involved with, but apparently fronted as well – The Spectres. Background info on them isn’t terribly robust (with the exception of this highly informative essay), but the vitals are that Matlock, along with four other blokes, including Budgie (of Siouxsie fame), Steve New (a holdover from Rich Kids) and Danny Kustow of the Tom Robinson band, met up in 1979, and recorded all of two singles. Originally billed as The Jimmy Norton Explosion, the soon to be re-christened Spectres also recorded a Peel session and opened for the Ramones in London in 1980. Potential contracts with Arista and Geffen never materialized, as well as the prospect of hiring David Bowie as producer. Ultimately, their pair of 45s were released on indies, Demon and Direct Hit Records, however The Spectres did garner publishing through Warner Brothers. 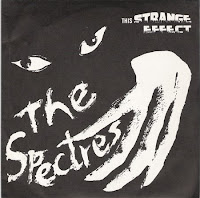 The best of their scant, four-song oeuvre, in my opinion is the a-side to their debut wax, “Stories,” which features politely whirring keyboards and perky trumpets that go a long way in defining this sprite keeper. Their second offering the “Strange Effect” single on Direct Hit wasn’t quite as striking, but for a moment or two, Matlock’s pipes suspiciously resemble Stiv Bators on said song. Very interesting.
Demon Records 7"
01. Stories
02. Things
Direct Hit Records 7"
03. The Strange Effect
04. Getting Away With Murder

I had forgotten that this even exists.

After hearing the great "Ghosts of Princes ..." I have to say I was more than a little disappointed with the Rich Kids compilation that I picked up.

Oh well, as one of those contrarians who wants the Sex Pistols to be Matlock's band and not Rotten's or McLaren's, great to hear this.

Actually, pulling on my pedantry anorak, I can reveal that This Strange Effect was The Spectres debut, at least here in England. I bought both that and Stories on their release. The picture sleeve for This Strange Effect was a decidedly cheap and amateur affair, while that of Stories was much classier and robust, almost as if they were "on their way" as it were. Saw them play at the 101 Club in Clapham in April 1980 and they were excellent.

Oh, and as the essay you link to points out, This Strange Effect was a Ray Davies song that The Kinks never recorded, but which was a hit for the sinister Dave Berry way back in 1965!

I saw The Spectres some 7 or 8 times throughout 1980-81 and purchased both singles, am absolutely amazed that they never made it, they fell apart when danny kustow left - nothing gets in the way of a good tune - they gave up the ghost far too early.

Cool single at the time. They opened up for the Ramones at London's Hammersmith Odeon in October 1980 as well. Good show!

For anyone interested I just posted the Jimmy Norton's Explosion on my blog: http://noiseaddiction.blogspot.com/2010/10/jimmy-nortons-explosion-john-peel.html

I am greatful here too. They were never released in Australia/NZ and I only ever had one track on a odd sort of compelation, so it is great to hear the rest.

mick hanson replaced danny kustow and we toured UK, then USA on the strength of signing here in NYC. The gigs were well attended and received.
Interestingly, audiences on the the west coast were more familiar with the bands material….We cut some tracks in NYC with the road manager and mick stayed and played with "Louise and the Creeps" (blondie style band)
Mick is still in NYC playing rockabilly with "Sean Coleman and the Quasars" has worked with Robert Gordon, and Matlock was in town a few years back to play with RG/Slim Jim/Spedding at BB Kings NYC.
More to come.
mick hanson

Could you repost these please?

Link has just been updated. Thanks for chiming in Mick!

Any chance of another re-post?

I bought the single "Getting Away With Murder" at a record store across the highway from the University of Miami in October 1980. lol

Just found your awesome blog! Thanks so much for all you share! I'm really thrilled to find this little gem. I've read about it, but never saw it before. :(

Would love to see these posted in flac one day. ;)