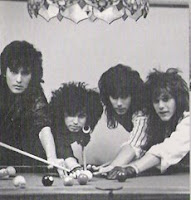 For you Candy enthusiasts out there, this post should be a real treat. The uninitiated would be well advised to give their lone album, Whatever Happened to Fun a listen here, as it will put these demos and 1985 live performance into sharper perspective. Candy were a mid-80s L.A. quartet who had a penchant for some of the catchiest power pop being made during their era, but were seemingly marketed by their label, Polygram, as part and partial of their city’s fabled glam scene. Despite being armed to the teeth with commercial potential (perhaps a little too commercial for some of you), the quartet was sadly never a high priority for Polygram. Their lyrical themes predominantly spoke of romantic, boy/girl reveries that had to compete with the all too dysfunctional realities of day-to-day city life. The title track to their album would become a cult fave in the years to follow (it was included on Rhino Records 1997 Poptopia compilation), but moreover, Candy served as the launching pad for singer Kyle Vincent’s solo career, as well as Gilby Clarke, who would go onto far bigger things as rhythm guitarist for Guns ‘N Roses.

The two sets of demos included here were recorded post-WHTF, assumedly as bait for a new record deal after the group parted with Polygram. Not too long after their major label fiasco, Kyle Vincent cut four new Candy songs (included here) but shortly thereafter, left the lineup. At this point, Gilby stepped in as mouthpiece, and the band recorded another set of demos (also included here) under this new incarnation. 2003 saw the release of Teenage Neon Jungle, a collection of unreleased songs, live tracks, as well as early demos for WHTF, however it did not touch on anything from the short-lived, Gilby Clarke-helmed era. BTW, both their debut album (which apparently never made it into the digital age), and Teenage Neon Jungle, are unspeakably scarce these days, fetching good money on Ebay. To sweeten the pot, I’m also tacking on a soundboard recording of a 1985 gig in Dallas, TX, where Candy performs eight originals, as well as rendering of Reginald Kenneth Dwight’s “Crocodile Rock."

This is very effin cool. Thanks!

Many thanks. Good stuff!

Thanks - do you know where to find the 'Whatever Happened to Fun' album?

could you please attach the download code again, please??

The Houston show has been removed. Anyway to get a copy?

This post is mighty old, would love a re-up if possible!

please reup if possible. Many Thanks!!

Thank you! But Liberty Hall can't be correct for the TX show, the venue was demolished in 1978.