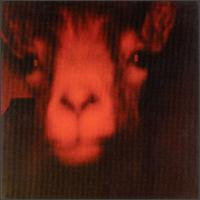 Not only am I fulfilling a request here, I'm also providing you good people with a fitting after-dinner mint to my recent Jawbox odds and sods post. Candy Machine weren't from D.C. (Baltimore actually), but they did have close ties to Dischord and DeSoto Records (the latter label released their third and final album, Tune International). Early on, Candy Machine developed a very indigenous, and frankly "art-damaged" strain of post-punk rock, with their calling card being frontman Peter Quinn, or more specifically his ranty, spoken vox, which were no doubt off-putting to those with a more melodically inclined palette. This is their debut, but they really outdid themselves on their next and most widely-circulated album, A Modest Proposal. A Myspace fanpage (linked above) offers this tidy backgrounder:


In 1990, while ad agencies and record companies in NY and LA were busy scrambling to produce a marketable identity for the youth culture Derrick Buisch (bass), Joseph Heeg(drums), and Peter Quinn(vox) were holed up in the Hat Factory warehouses in Baltimore. Having just lost Jamie Panzer to Austin, Tx, the three decided to hide out from the gluttony of Miller Lite guitarists in order to begin. It wasn't until Daniel Papkin was introduced to the band that The Candy Machine came into full fruition. After 2 self released tapes, DeSoto records put out the Candy Machine cardboard 7" that would get The Candy Machine out into the light of the rest of the country. In 1992, Skene records, through the mastermind connection of Damon Locks (Trenchmouth) released 25, the bands first full length CD. Soon later (Heeg moves to Germany, and Buisch moves to Minneapolis) co-conspirators Lyle Kissack and Forrest French join the band on drums and bass. After the 7" release "Love of Politics, Politics of Love" (SKENE) and a handful of tours, the band and Forrest French parts ways in 1993 making way for Panzer to move back from Austin to re-join the band on bass. This new Machine would soon record and release A Modest Proposal (SKENE) which would soon after be aptly described as "a blueprint for chaos" and thus reflect how the band was stranded in an ice storm in the flooded WGNS studios. Reaching underground notoriety, the reinvented Candy Machine, after touring the US and Canada, decides to leave Skene records to look for a more conducive vehicle for their next release. In 1997, the Candy Machine find themselves back at the eastern seaboard with long awaited Dischord/DeSoto release Tune International maintaining the group aesthetic vision while reinventing themselves again, beyond classification. They continued their saga of a never ending line-up changes with the recruitment of bassist Nat Rabb and keyboardist Chuck Scott before calling it quits the following year.

I love the candies and to share it with my boyfriend in a speciall time. Actually when he buy viagra we share not only our candies but a great time together. I really love it!!! for me the candy are very delicous.

Can someone reupload this?