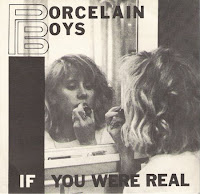 Ok, here's the second (and perhaps final) post regarding the second best power-trio to emanate from the North Star State (that's Minnesota for those not in know, like me two minutes ago before I looked up the state's nickname on Google). The dozen 7" and comp tracks assembled here predate the Porcelain Boys official debut album, Away Awhile, which I featured last week. The 'Boys gnarly take on the whole "popcore" thing, as it turned out, proved to be just as gratifying and substantive as the smartest work of their influential antecedents, The Descendants and Doughboys. That's especially true in regards to their five-cut, debut 7 ep, If You Were Real, that kicks this whole shebang off. I'd argue that this, along with what I've heard of their Fetish for Female cassette release, was the best of what their initial lineup of Erik Kaiser, Tom Spence, and Scott Cook had to share with the world at large. Truly endearing, hook-savvy, romantically-frustrated punk-pop at it's finest "Bedtime" not only made it to my turntable, cd-recorder, and MP3 player, but would you believe my answering machine for a period there when I was in college during the '90s! "Fortune Favors the Bold" was inspired by thw cult-classic comic book series, Flaming Carrot. 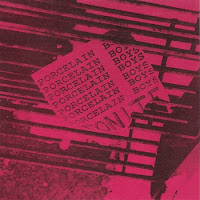 If You Were Real was followed up by their second single, and last completely unto themselves, "Relive" b/w "Squeaky Clean," two comparatively mid-tempo stunners that continued the Porcelain Boys stringent quality-control. "Brain Train" was featured on a THD-Records compilation 7," the same label that issued both of their singles. As I mentioned in my last P/B post, the trio made their way onto the radar of hundreds, if not thousands of ears who caught wind of the swift, deftly crafted "Sidetrack" which appeared on the Lookout Records 1992 Can of Pork compilation. Unfortuntaely, I think this incarnation of the band had dissolved at this point. I'm closing things out with a trio of tracks culled from the It Came From the Cold tape compilation, which from my guess dates back before any of these releases (maybe 1988 or even earlier - don't own an original myself). It contains an early version of "Week to Week," later recut for Fetish for Female. By the way, if someone can fix me up with an original copy of Fetish, I'll be forever in your debt.

once again, you have a great gift for putting together fact, your own opinion and some nice guessing to fill in the blanks. i'd say you've done a great job of putting together these pb packages. there are two other demos, counting plunge it and a live show with the original three members plus a few unreleased songs. i can only hope you may someday write something half as well about the giant slide as you have the porcelain boys. you can email me at mike@stephenegerton.com if you would like to do a future post of the rest of remaining collection with the original line up.

Cool stuff Spavid. These singles bring back such memories. I remember talking to Brad at Rhetoric Records about these singles and saying how I'd love to release a PB's collection one day. That's when he informed me that they were once again playing and it wasn't too long before Scott Cook called me up to talk shop. The rest, as they say, is history...

Thanks Mike. I'll be getting in touch soon.

BTW, is this Alan from PopKid Records?

Hi Spavid, I have one more porcelain boys song, in "I can't believe it's not water" Comp. (track 6, titled "What a day"). You can find it here: http://nosotrossomoslosmuertos.blogspot.com/2009/05/vvaa-i-cant-believe-its-not-water.html.
Thanks for these albums and for your work. (I'm really sorry for my english, is horrible, but I hope that you understand all what I say)

The Parasites covered "What A Day" on the Burnt Toast 7", I think it even came out before the Just Add Water comp.

the original version of what a day is posted on the myspace as sunshine rain. http://www.porcelainboys.com

It turns out I have the I can't believe it's not water compilation and that Parasites 7." You folks are pretty damn sharp.

ha. spavid you have a fun blog site.

here's a song recorded with chris pierce at tech x. he just remixed it a couple months ago. one of my favorite. LIST. the link will only be live a week as i am a freeloader.
http://www.yousendit.com/download/cmcweUNKYUltUUhIRGc9PQ

I once went record shopping with Scott in Mpls. and he asked me point blank "What do you think of our record?" Being that punk rock was pretty serious business in the late eighties I told him that it was good (true) but that the lyrics were a little twinkie. He actually agreed, so long as I exempted his song "Fortune Favours the Bold" which gave praise to the mighty Flaming Carrot and I had to say that the song had the best lyrics on the single.

Looking back at my copy (372/1000) the lyrics are a little twinkie but it doesn't hold this great record back at all.

Thanks for the MP3 Mike, as well your little anecdote Jeffen. Too bad I never got to see them live. I heard a live recording by them where they cover the Doughboys. Meant to mention that in my post but totally forgot.

Hey Mike! Its Darren from Winnipeg. I was looking for PB stuff in mp3 format and came across this site....Awesome spavid! Thanks for posting. I have some good news (for those who care). For those who don't know (all of you except Mike), I played drums with the PB's for a short while commuting from Winnipeg, MB. Canada and Minneapolis. I found some footage of us jamming (can't remember who's house we are in.
I will be uploading quite a few songs, check my youtube site for the videos
http://www.youtube.com/watch?v=drn_wxOwQ5k
(check back often in the next couple of days for new footage). Almost 20 years ago!!! Take care all.
Darren

Nice words about a fun-assed band. I had a blast. TS

Just found this post and so glad I did. I forgot about the THD Comp and Relive (don't know how cuz I have an extra Relive after being very excited to find it at a store in San Francisco) and this saves me the trouble of digitizing them. Saved my lunch money to order records from THD but nothing was as good as If You Were Real record.

anybody downloaded this? any way I could get it?