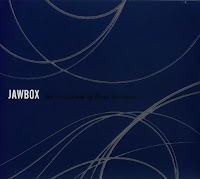 While they never quite put the post-hardcore punk movement on the map during their run in the '90s, Jawbox were certainly one of the best purveyors of the genre, and perhaps the best in their hometown of D.C. Over the course of four thoroughly recommendable albums: Grippe (1991), Novelty (1992), For Your Own Special Sweetheart (1994), and Jawbox (1996) and a spate of singles and compilation appearances, Jawbox fused together a dissonant, amped-out guitar sprawl with a kinetic rhythm section, fronted by powerful leadman Jay Robbins. Getting their start on the interminable Dischord Records, the band made a surprising jump to a major in 1993, Atlantic, and recorded their two best albums for them despite not having much to show for themselves (or the label) thereafter. The quartet folded in 1997 without much fanfare. This of course is the short story, but for those who've been acquainted with their music, it speaks for itself much better than any blurb can.


In 1998, Jawbox released a CD of rarities, b-sides, and live material, My Scrapbook of Fatal Accidents. It left a few things out however, including an eight-song demo recorded in 1989 that kicks off this fan-curated sequel. The demo features a pair of songs, "Beneath the Wheel" and "Motherlode," that were never rerecorded for any future release. Another Scrapbook... also contains six live selection from their Your Choice Live series split CD with Leatherface, tracks from Atlantic Records promo disks, and Dischord singles. This collection may not be a representative primer for new Jawbox listeners, but it does an excellent job of culling together all that was left on the cutting room floor, and functions as a logical companion to the official My Scrapbook of Fatal Accidents disk, that I believe is still available through the band's in-house DeSoto label.
01. Tools and Chrome
02. Bullet Park
03. Beneath the Wheel
04. Footbinder
05. Consolation Prize
06. Paint Out the Light
07. Motherlode
08. Something Must Break (Joy Division cover)
09. Iodine (demo)
10. Lil' Shaver
11. 68
12. Chump II
13. Thin White Line (Avengers cover)
14. Falk
15. Jackpot Plus
16. Motorist
17. Absenter
18. Chinese Fork Tie
19. Tools and Chrome (cello version, not performed by Jawbox)
20. FF=66
21. Green Glass
22. Tongues
23. Chinese Fork Tie
24. Chicago Piano
25. Motorist
1-8 from 1989 demo
9 & 13. from Atlantic Records promo-only releases
10 & 11. b-sides to "Savory" cd single
12. from Jabberjaw: Good to the Last Drop compilation
14. from Simple Machines singles club 7"
15 & 16. Dischord Records 7"
17 & 18. DeSoto Records 7"
19. from Jawbox on Cello: a Benefit for Cal Robbins by Gordon Withers
20-25. from Your Choice Live split CD w/ Leatherface
Hear
Posted by spavid at 6:03 PM

great blog! please check out or maybe put it on your link:
http://noiseboxmusiccollection.blogspot.com/

we have the same interest in music. thanks and keep up the good work!

Really glad to hear this - I didn't even know it existed. Thanks!

Just so you know, this is not an offical release.

i'm fairly sure this person knows its not an official release...

i would like to add there is also an alternate version of Savory on a split 7" with Edsel. its awesome

Thank you so much for this.

I have that split with Edsel. Maybe a future upload.

Heya¡­my very first comment on your site. ,I have been reading your blog for a while and thought I would completely pop in and drop a friendly note. . It is great

stuff indeed. I also wanted to ask..is there a way to subscribe to your site via email?

I just tried the link and it's still active. Let me know if you're still having trouble.

Your re-up reminds me that this was the very first thing I downloaded from Wilfully Obscure, and was the first of almost daily visits to see what you were up to. Glad to still have you here, Spavid!