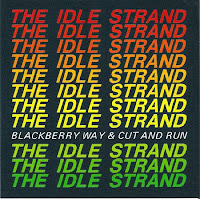 The Idle Strand were a Minneapolis trio, who put out a pair of albums in the '80s, Blackberry Way & Cut and Run. They were reissued on CD by the German Line Records label, but there's nada in the way of biographical info to be found in the booklet...or online...or anywhere. In fact, even the track list fails to denote where one album ends and the other begins. What we do have are 23 songs, many of them loosely akin to Let's Active and the dB's, circa the latter's Like This LP, though not as alluring. Despite a few misfires, there's still enough of that "New South" sound (ironic of course given the group's subfreezing locale) to make The Idle Strand recommendable.

Find info on The Idle Strand @ http://www.blackberrywayrecords.com/ I am Michael Owens and was a member of THE IDLE STRAND as well as a founding member of BLACKBERRY WAY RECORDING STUDIO'S.

link dead ..upload it again
Thanks

Could you include this with your next batch of re-ups? Thanks a bunch!

Both records as well as a previously unreleased record by The Idle Strand will be remixed and reissued over the coming year. You can find several tracks from the Idle Strand on Mini Hits Of Mpls Vol 2 on our website. Blackberry Way has placed several songs by The Idle Strand into TV shows including "Red Oaks" on Amazon as well as ABC TV's "Wicked city". We have also placed a track from The Flamin' Oh's "Skinny Legs" in "Red Oaks". You can find that track on the Remastered Paint The Sky CD. "Blackout" by Swing Set has been placed in the NetFlix hit Stranger Things and they also have several songs in Red Oaks. "Blackout" can be found on Mini Hits of Mpls and we have reissued their CD The Soul Remains as well. www.blackberrywayrecords.com