Word went out late last week that the first two Feelies albums, the critically lauded Crazy Rhythms (1980) and it's somewhat belated follow-up The Good Earth (1986) will be reissued on Bar/None Records in September. Though this post is hardly devoted to the Feelies, it actually concerns two spin-off bands, The Trypes and Speed the Plough, who's first album I was inspired to dig up this week upon news of the aforementioned reissues. 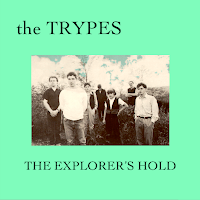 During that six year hiatus between the first two Feelies albums, The Trypes were formed in 1984 and released one ep to their credit, The Explorer's Hold. To get a grip on The Trypes/STP exact lineage to the Feelies, Trouser Press once again lays it out a lot better than I ever could:


The seven-piece Trypes eschewed some of the spare, ringing guitar pop the Feelies reveled in on Crazy Rhythms, and instead opted for something multi-fold more textured and organic, with detours into heady psychedelia ("Love You Two") and Velvets-y folk ("The Undertow").

Regarding the last sentence in the blue text critique from Trouser Press, Speed the Plough were essentially Feelie-less by the time the released their self-titled debut. In theory, STP could have sonically manifested themselves as the exact same band had the Feelies not been within their sphere of influence. In a near-perfect assessment of the record, Ira Robbins of Trouser Press fame opines: Their eponymous debut is rough around the handsome, rustic edges; although clearly Feelies-influenced (thanks especially to Jim DeRogatis' prim and precise drumming). Rustic indeed, but there's also a contemplative element that imbues this album as well. The band's robust six-individual lineup, coupled with refined, glowing arrangements involving accordions, woodwinds and saxophones, lends itself to a dense, indigenous latticework of sorts, that by and large works to a tee. I have yet to come across this album on CD, and don't own the vinyl incarnation of it either. My rip of this album was culled straight from an original cassette. Not what you would deem perfect fidelity...but what are you gonna do about it?

Update: The Trypes ep has been reissued and expanded.  Get it on wax or digitally.

Thanks for ripping those (I do have the STP vinyl but like having something to carry...). Anyway, check out a post-STP/pre-Feelies reunion configuration, The Sunburst, who still have half dozen tracks on the website for download, http://www.geocities.com/thesunburst/index.htm

I have the STP, never heard the Trypes, though I know they existed. I was just wondering if you have that other Feelies project Yung Wu... I used to have it on vinyl... long time ago...

Found the Yung Wu album. Uploaded on my own blog:
http://bicycle-adventures.blogspot.com/

I'm really enjoying the Trypes/Speed the Plough music, thank you!

These are fantastic! Thanks for tracking them down. I've wanted to hear them for so long.

It was a real trip to find this post and the comments. Thanks for the kind words. Actually, Speed the Plough have reformed after a decade-long hiatus and have just released their first album in 15 years, Swerve. The band now features 2 generations of players. For all the info, go to www.speedtheplough.com
Again, thanks and best regards,
John (for the Plough)

Nice finally to stumble on this one again. For me it will always bring back a summer I never thought would end.

Can you please, upload, Speed The Plough's "Marina"?

A friend from Greece
Efstathiou Stathis

It's now on Spotify
http://open.spotify.com/user/dannykudos/playlist/5NhcuGRLJMi55nSVHTyudf

Thank you kindly for the upload!!