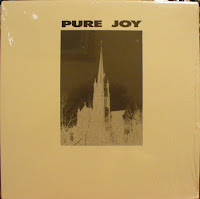 In 1992 I went gonzo for a band called Flop, a Northwest combo I was exposed to via a Damned tribute CD, Another Damned Seattle Compilation (possible topic for a future post). Their rip-roaring remake of "Disco Man" had me scurrying for more Flop pronto, and as luck had it, they had recently released their 16-song debut LP, Flop and the Fall of the Mopsqueezer! Though they hailed from the city that put grunge on the map, the quartet helmed by the singular vocal timbre of one Rusty Willoughby, drew a hell of a lot more inspiration from the Buzzcocks than Black Sabbath, and were all the more refreshing for it too. After Mopsqueezer! came two more albums, the Epic Records minted Whenever You're Ready in '93, and their 1995, barely remembered swan song, World of Today, back on Frontier Records where they started. For all intents and purposes, this post isn't about Flop per se, rather Willoughby's prior band, Pure Joy - an outfit I discovered posthumously, but ultimately found to be just as substantive than Flop.

I'm presenting you with three Pure Joy releases, their first LP (Unsung) and a pair of eps. Starting things off is a four-song, self-titled 12" from 1986, quite possibly issued by the band themselves, as no bona-fire record label is given, rather simply credited to "Dwindle Music." On their maiden voyage, Pure Joy were clearly not punk...or grunge...or new wave...or none of that. There's definitely an indie bent to the ep, often times duplicating the ringing, modern guitar rock laid out by bands like the Church. The overall effect is that of a louder Three O'Clock (remember them?) sans the psychedelia. On this record, Rusty is accompanied on keyboards by his brother, Randy Willoughby. Definitely their most "pop" record, and in a class by itself when compared to their full lengths. 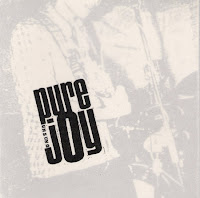 Technically, the first proper Pure Joy album to hit the marketplace was a disk called Carnivore on Popllama Records in 1989, but was actually preceded by an album recorded in 1987 that wasn't released until the mid-90s. That record was Unsung, and while Carnivore is still preferred by a lot of fans, Unsung ain't no slouch, containing some of Pure Joy's purely greatest, like "Calvin and Hobbes" and "Standing on a Bridge." The jangly guitars are thankfully still present and accounted for, but the sonic ante is upped significantly resulting in a thicker, more robust sound. 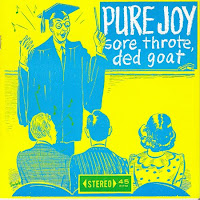 That leads us to the final Pure Joy release, a live 7" ep, Sore Throte, Ded Goat, recorded as trio in 1989 or 1990 (no exact date specified) at a joint called The Vogue. It features an especially potent version of "Standing on a Bridge" (as mentioned above) along with five more songs, including John Lennon's "Gimme Some Truth," which unfortunately cuts out at the end, because "the tape ran out," or so sayeth the sleeve notes.
Pure Joy reconvened in 1997 with their third album, Getz, the Worm, and again in 2003 for Gelatin and Bright. Rusty Willoughby has also released a couple of solo CDs, most recently Filament Dust, available here. If that wasn't enough Rusty had yet another band making the rounds a few years ago called Llama. In fact, go this page to download a whole mess 'o Llama songs. You'll be glad you did. I hope. More info can be gleaned on Pure Joy over at Lamestain blog.

Sore Throte, Ded Goat ep
Side A: Jester/Mary the Whore/Division
Side B: Standing on a Bridge/Pieces/Gimme Some Truth

Like you I was a massive FLOP fan, but never got around to buying Pure Joy stuff, don't know why as they were a great band, so glad of this post
Many thanks

Thankx for all and for this post in particular.

Thanks for this awesome blog! Any chance you could re-up Unsung? It seems to have been deleted due to inactivity. The other two links worked for me.

The link for Unsung has just been fixed. Thanks for alerting me.

Could you re-upload the S/T EP please? Thanks. :)

Do you have Gelatin and Bright? It's the only thing of theirs I've not been able to find. If so, would you care to post it, or put it in your slsk folder? Cheers!

Can you please re-up Unsung when you have a chance, what a great find!

Any chance of re-up for the Pure Joy & Flop material? Cheers!