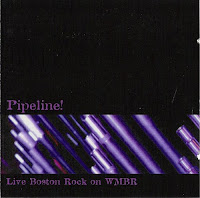 Pipeline - Live Boston Rock on WMBR, not only serves as a two CD compendium of vintage performances from the first six years of the long-running, in-studio performance weekly radio show, but is a veritable "Who's Who" of eastern Massachusetts indie-rock acts from the early '90s. An institution at MIT campus since 1989, Pipeline is still broadcast every Tuesday evening from 8-10 pm eastern on 88.1 FM WMBR, and as you might guess, can be streamed or podcast gratis.


This 40-track collection of exclusive live-to-air recordings feature no less than ten acts that have been featured on Wilfully Obscure in one form or another: Dambuilders, Gigolo Aunts, The Cavedogs, Roger Miller (Mission of Burma), Lou Barlow (Sebadoh), Flying Nuns, Bullet Lavolta, Moving Targets, Christmas (the band), and Fuzzy - and there are probably another ten names here that would be equally as suited on these pages, including the likes of Anastasia Screamed (who indulge in a choice Television cover), Buffalo Tom, Green Magnet School, Smackmelon, The Queers, and Come. Given it's era, Pipeline has it's share of meathead grunge/punk (mostly situated on disk one), but hardly enough to detract from a startlingly consistent and jaw-dropping lineup. Not a bad place to expose yourself to some underexposed, but worthy hopefuls from yesteryear either. Dig in!

I was in the room when the Gigolo Aunts recorded this. It was an awesome experience and a great radio station. It was 1000 degrees that night and I got to meet Gary from Big Dipper!

This is a great comp that I had pretty much forgotten about!

a little bit of info: the Green Magnet School track on that CD is actually "12 Gauge" (a song which featured on the Sub Pop GMS/Six Finger Satellite split double 7"), not "Two Folds", it was mislabled for some reason...

Hi. Would you mind reposting this when you get the time? Thanks!