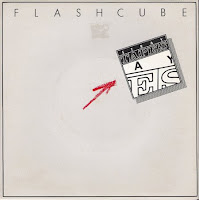 Looks like i finally made it to my final entry in the Singles Going Single series I had aimed to complete by the end of 2008. Guess I wanted to close it out with something special. Last year I heard a 30 second snippit of a song by an ultra-obscure Perth, Australia quintet, (the) Stray Tapes titled "One of the Crowd." It took some serious online hunting 'til I found someone generous enough to sell me his copy. Released independently in 1981, it was to be the band's only commercially available release before frontmen Nigel Hartford and Peter Bates moved onto a new project, German Humour.


"One of the Crowd," with it's clangy Johnny Marr-esque chords, is about trying to lure a dearly missed "cold fish" out of his/her hovel for a night out on the town, just like old times again. One of the sweetest downer pop songs to ever grace these ears. I'd describe Stray Tapes as post-punk. Andrew Chambers lightly applied keyboard fills are more cold wave than new wave, but overall, the songs exude a special warmth of their own. I apologize for the copious static. One of these days I'm going to have to break down and buy a Ronco Record Vacuum off eBay.


Though this is "offically" the last entry in the SGS saga, thier will no doubt be one-offs, or to phrase it differently, "SGS addendums."

A. Flashcube
B1. Lights On
B2. One of the Crowd

Lovely record. I have this but without the cover. Still, One of the Crowd is surely ripe for a cover version. Everything else '80s seems to be. There is a lovely lightness to playing and the writing. Still chimes effortlessly oh, 30 years later.

I was the original singer in Stray Tapes. Although they had sacked me before this single I was drafted in to do backing vocals on one track.
Yes, we were 'post-punk'. My audition, as I recall, was doing Teenage Kicks and The Cars' Just What I Needed.
In my time in the band we were listening to and absorbing influences such as Joy Division and The Cure. They don't really show in these songs though.
Nigel Harford was a talented tunesmith.
Most of the gigs I played we supported the incomparable and legendary Triffids.

And, yes, I agree that they missed a trick. One Of The Crowd is the song stuck in my head and I haven't heard it for years.
I can't recall Flashcube at all.