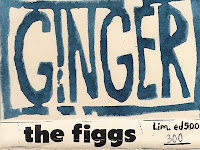 Late last year, I dedicated a post to the Figgs outtakes collection Rejects. While that sweet, vinyl-only delight was released in 2000, the Figgs history actually dates back to the late '80s. As far as I'm concerned however they might as well have opened for business in 1993, the year I discovered their debut cassette album, Ginger, at the great Last Vestige Records in Albany (literally a basement operation at that point, but I digress).


Originally a quartet, the Figgs hailed from Saratoga, about a half hour from the Capital District. Ginger was the first of two precursors to their 1994, proper debut album, Low-Fi At Society High on Imago Records, (the second being Ready, Steady, Stoned which I'll get to in a moment). Ginger featured the songwriting contributions of three Figgs, specifically Pete Donnely, Mike Gent, and to a lesser extent Guy Lyons who would depart the band by the late '90s. The tape begins with "Bitch Theme," truthfully, a less than representative instrumental spliced together with a miscellaneous foreign radio/tv broadcast of some sort. Two and a half minutes later, the first bona-fide song, "Kristy McNichol's Boots" kicks in, a Gent-penned number that sold me on the band immediately as a fan for life, with it's seemingly simple refrain of:


Why don't you quit your bitchin?
Use your credit cards, the bills are in the kitchen
The kids are in the yard
And you blow your mind...


More like blew my mind. "Boots" leads into an equally stunning and vigorous slice of power-pop, the Donnelly commandeered "Sleaze." By and large the remainder of Ginger holds up just as effectively. "Happy," another best song contender, leading off side two, was also issued on a 7" single from the same period, with a Green Pajamas cover on the flipside, "My Mad Kitty." "Wasted Pretty," as some of you might already be aware, crash-landed at Society High in a rerecorded incarnation.


With perhaps the exception of the oddball intro track, Ginger is remarkable, suggesting an ever so slight wink and a nod to Elvis Costello and The Replacements, completely uncontrived and hardly derivative. As you can tell from the scan, the tape was limited to 500 copies, mine being # 300 - even steven, and for the record, a total coincidence. Ginger was promptly followed up with another album-length tape in 1993, Ready, Steady, Stoned, reissued ten years later on CD with a ton of bonus tracks, which you can and should buy from the Figgs web store. According to the discography on the Figgs Myspace page, there is another unreleased home-grown album from this era, Waiting For The Bugasauras, that I'd probably trade a left nut for. If only it were that easy.

luv The Figgs and yer blog!

Thank you so much for posting this! I had a dubbed cassette of Ginger that I wore out long ago. Do you have the Pete Donnelly solo tape? That's one Figgs rarity I'd love to hear.

Missed the boat on scoring an original copy, but I have high-quality MP3s of the Donnelly tape, and some art to go with it. Definitely keep your eyes peeled.

Wow, I had Ginger when it came out but haven't heard it in a long time! Thanks for the post...

Not that it Figgs, so I'll investigate a bit more, also going to the pharmacy to buy viagra and super, to buy ginger.

Any chance you'll post Ready, Steady, Stoned (cassette version)? I have the deluxe version with the extra tracks, live tracks, etc. But the Figgs remixed the album, left out some songs, and added additional songs that had been cut from the original cassette album. I've been looking for it for some time now.

Let me know. Thanks.
Sam