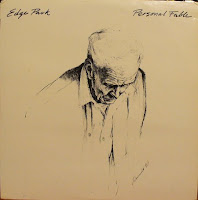 Edge Park were a quintet from Ithaca, a college town in upstate New York. To say they were the prototypical college-rock band would be right on the money, as all five members attended Ithaca College at the time, and seemingly made headway on their school station, WICB. Though they state in their bio that The Cure and the Church made the biggest impression on them, Edge Park's mildly downcast but chiming guitar pop also fell into the realm of The Ocean Blue, Springhouse, and even Simple Minds. Personal Fable, while quite inviting, falls just shy of remarkable. When I ran a search for them on Google last year, I stumbled on a quote from a fan in direct reference to the album: "They don't make 'em like this any more." I'm inclined to agree. BTW, the label that released Personal Fable, BCMK Records was based in Buffalo, NY, who I at least think had a few other acts on their roster.

thanks for posting this. i have the album stored away somewhere. good live band.

BCMK did release some singles and albums, but was better known as a great studio run by Tom Calandra. It was on Delaware Ave just north of Hertel (next to the library. Tom was a really nice guy in my dealings with him and a great presence on the Buffalo music scene from the beginning!

BCMK was sort of like a vanity label, except dirt cheap. Tommy was a great guy but hard to work with. They had a great engineer, Mike Brydalski. I was active on the label 81-87, which is when they peaked, in my opinion. Recording was done in Tom's basement on Hobmoor, then moved to a commercial location on Delaware. I was told they lost a lot of their ambience after the move. Check out early David Watts, Pauline and the Perils, Western Voice, the Stains... The best years were 82-83 when the label hosted the BCMK live revue. Then Tommy got paranoid about liability and it stopped. That was like him. His wife Edie was a true saint. He died too young. I miss him every day. If you want close and up-front info on the 81-87 years, I'm your guy.

The singer/guitarist was the son of one of my parents' friends and he went on to work with Peter Gabriel at Real World studios for a bit. What a blast from the past!

I cannot believe I found some reference to Edge Park. For me, Edgepark was the quintessential college band with just the right mix of The Cure, U2 and a few other 80s rock bands of their time. I have the record somewhere but I can’t seem to find it. Wish I could download their music again but the link here doesn’t seem to exist any longer.

Much appreciate the review. We definitely had our share of fun while in this band. We did count Echo & the Bunnymen as a primary influence as well. Decision to record at BCMK was driven by Chris Masters who lived in Buffalo. Best to all!

A friend left me her copy of Personal Fable. I will give it a spin when I get my turntable fixed.