I can't say to what extent San Diego's long defunct aMINIATURE and Drip Tank were aligned back in the day, but they must have been fairly busom buddies to back each other up on two 7" singles within the span of a year. Purely out of convenience and/or coincidence? I think not, but anyway... 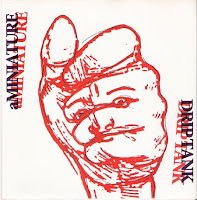 aMINIATURE have been explored on these pages before, specifically regarding a single on Sing Fat Records posted last summer . If you haven't been enlightened on this sadly departed outfit already, think smart, post-hardcore rock a la Jawbox, exhibiting dexterous technical finesse without laying waste to the songs. "Weepo" from the '92 Topsy Records single was nicely retooled for the band's Depth Five, Rate Six record, while "Safety" remains exclusive to this disk. aMINIATURE's cut for the second split single with the Drip crew, was "Towner on the B-side" was tracked at the Casbah nightclub in San Diego in 1993. Later rerecorded for Depth Five..., Spoon were enthusiastic enough to make it a staple of their mid-'90s live sets. 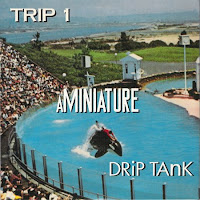 The band on the other side of these coins, Drip Tank, were purely a local phenomenon. A raucous, coed quartet (originally named Joe's Drip Tank from one account) straddled that fabled indie/punk divide over the course of two albums for Headhunter Records, Slake in 1992, and Sprawl two years later. The former of those two may be posted in it's entirety at some later point, but their side of the Topsy Records wax includes two of their best. As was the case with the aMINIATURE disk on the Trademark split 7," Drip Tank's "Mumblehead" was also a live at the Casbah affair. Hope that's not too confusing.

amazing, i was thinking about picking this up online the other day. thanks very much
-alex

yo! i am looking for a song by the No no's called Cherry Blossom. it was on a tape i had back in 97, im pretty sure fancy free was on there too-- i found that link you had but the song i am searching for wasnt there... any ideas?

I think they were "Tom's Drip Tank" originally. They were fun! They got a lot of local publicity by doing a "tour" of San Diego 7-11 parking lots in a U-Haul.

Thanks Princesss. I appreciate the correction.

I used to own this until my ex drunk roommate in Hollywood sold all of my records to Amoeba. Thanks!

Hey, Julie D. from Drip Tank here. Just ran across this post and thought I'd give you some background. Drip Tank and aMiniature were very much "aligned" back in those days. We played tons of shows together and hung out socially quite a bit. We decided to pair up on the Topsy single to make it cheaper for each of us and to reach more people. I was even housemates with John from aMiniature at one point.

I can't remember specifically why we ended up on the Headhunter 7" together, but we did have a lot of crossover fans in SD, so maybe they thought it was a good fit.

My favorite of our 7" singles is Motherlode/Shithouse. You should pick one up if you ever run across it.
Cheers -
jd

(Howdy Julie! Fancy meeting you here.) Saw both bands a lot back then and as good as the recorded stuff is, live, and on the same bill (which was often) was the hottest ticket in town. And Julie's right. Shit House and Motherlode rule.

Oh,the file was deleted cuz inactivity... Do you feel like re-uploading it?It's a must have.
Thank you very much!!

Would you be able to re-up this & the other aMiniature single (https://wilfullyobscure.blogspot.com/2008/08/singles-going-single-61-aminiature-7.html)? Thanks!