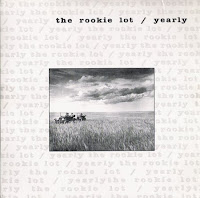 The Rookie Lot and Yearly were two young Long Island bands that saw their very brief rise and fall, just on the onset of the mainstream-ization of the emo-punk movement they so slavishly toiled in. In fact, both bands functioned as inadvertent breeding grounds for significantly more successful outfits that would immediately follow.


The Rookie Lot, who would later see members go onto Brand New, The Movielife, and Nightmare of You, were influenced by Lifetime, and Lifetime proteges Saves the Day. Speaking of Saves the Day, Eben D'Amico of Yearly (man, what a great band name) immigrated to Saves the Day, He was a fixture in their lineup as bassist until he was booted in 2005. At any rate, Yearly had an amateurish bent, even for emo kids, but possessed just enough potential for me to bemoan their breakup. You can read a little more about both bands on Wapedia's entry for the Rookie Lot, or save your trouble and check out the condensed version below.


The Rookie Lot was a five-piece Long Island-based band that formed in January 1998. The band's sound derived from earlier New Jersey and Long Island based melodic hardcore bands, such as Lifetime.


The Rookie Lot played with many bands such as Vision of Disorder, Saves the Day, Ten Yard Fight, Fastbreak, Glassjaw, Silent Majority and Kid Dynamite. The band released a demo as well as a split 7" (limited to 1000 copies) with Yearly. Yearly included Eben D'Amico from Saves the Day as well as Scottie Redix and Peter Toh from The Stryder.


After The Rookie Lot disbanded, Jesse, Garrett, and Brian formed Brand New, while Brandon went on to play in The Movielife and Nightmare of You. Alex started Crime In Stereo.

I'm very excited to hear this, i used to be a big fan of The Stryder and have wanted to hear these Yearly tracks for some time.