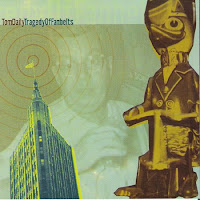 Way back when I started my Singles Going Single series, a brilliant indie-punk band outta Chicago band called Not Rebecca was my very first entry. I still haven't forgotten them (obviously) and strongly recommend their Twin City Obituary and Rocketship to Canada albums, both on Johann's Face Records. Tom Daily (actually Tom Tounihan) was half of the Not Rebecca songwriting nuclei, and after the band splintered, Tragedy of Fanbelts was his first solo release. Though it lacked the punch of the aforementioned NR albums, it retained the grit. Dare I say he followed Ted Leo's aesthetic? Two full lengths followed, Happily Deceiving Culture in 1999, and The Burlington Northerner two years later, but I still prefer this ep, probably because it's the most in tandem with the Not Rebecca records.

I know someone requested NR recently on here, so I'll try to get some of their albums up in the near-future. For now, chew on this.

Thank you for saying nice things. Below is a link to some Magnetic Fields covers that I've been working on. Hope you enjoy.