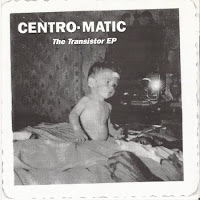 William Johnson, the focal point of Denton, TX's Centro-matic might feel compelled to take me into a back alley and straighten me out for espousing the notion that his band's formative recordings (i.e. these two 7" eps) were just as rewarding, if not more so than their latest, Dual-Hawks, but it's a chance I'd be willing to take. 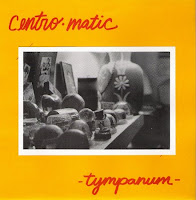 Loosely affiliated and lumped into the No Depression/alt-country crop, Centro-matic have carved out a niche, not to mention a hardy fanbase for themselves. Their/his earlier releases, including these disks, the 1996 debut CD Redo the Stacks, and a couple of cassette albums leaned more toward to the lo-fi end of the spectrum rather than Uncle Tupelo. In fact, these records were recorded solo, and intermittently employ drum-machines instead of the real McCoy.


Nevertheless, Johnson's whiskey-addled timbre was in full-effect from the get go, and remains lovingly unvarnished right up to this day. The Transistor and Tympanum 7" eps feature concise, sometimes fractured songs, vaguely like Guided By Voices on occasion (get an earful of "Fifty-Thousand Years Ago") , hardly evoking the No Depression-esque inclinations that would crop up on future Centro albums, not to mention Will Johnson solo disks, and his virtually identical "side-project" South San Gabriel. For better or worse, a lot of fans missed out on these songs along the way, but better late than never.

Transistor
01. Tractors in the Big Blaze Sun
02. It Was Nothin' Darron
03. If I Had a Dartgun
04. Numbers One and Three
05. Fifthy-Tousand Years Ago

Tympanum
01. Celebrated Departure
02. Calling Up the Bastards
03. All Your Different Methods
04. Turning Your Decisions

Wow!! Thanks so much for this. I would love to hear those cassettes if you have them. Will played a short set a few bands before Grand Champeen at Hole In The Wall at SXSW this year. Centro-Matic is hitting the road soon with The Monahans - another cool Austin band

Killer post. I already have 'Transistor' but have been looking for a vinyl copy of the 'Tympanum' 7" for years. This will have to tide me over...

It looks like you spend a large amount of time and effort in writing the blog. I am appreciating your effort. Truck Chrome stacks

Could you possibly re-upload this? Seems to be the only link on the internet, I would love to hear these EPs.

OH man, great stuff. I'm going to miss Centro-matic (RIP). I tried like hell to get tickets to their final show.

I also wanted a unicorn when I was a kid. I think I had a better chance of getting that wish to come true than to score those final show tickets.

I saw their last show in Austin and then drove to Denton for the last 3 nights. Great band and great shows. There seemed to be a few extra tickets floating around on Fri & Sat..but Sunday was packed. I suspect they will be back in 5 to 10 years :)