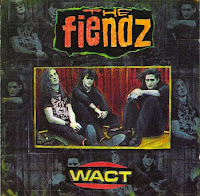 The album you are about to (potentially) download will likely reside in your MP3 player for some months to come. Totawa, NJ's Fiendz are a long-running trio who deliver infectious pop via pummeling power chords and the most indelible hooks this side of any given Parasites album. Lead Fiend, Jerry Jones possesses a timbre uncannily similar to Evan Dando, though I can't say that their second (and best) album, Wact, resembles any particular era of the Lemonheads, at least not overtly. "Concise," is a keyword here, with most songs not clocking past the two-and-a-half-minute mark, though the band rarely ventures into pop-punk overdrive.


In 1996, the Fiendz were inexplicably possessed to rerecord and re-release Wact in it's entirety for their own in-house label, Black Pumpkin. Though the revisions of the album's fourteen (really fifteen) cuts weren't entirely blunted, they did difuse some of the original's potency. Should you wish to partake in the renovated version of Wact, or any of the band's fine follow-ups, like 2002's almost as impressive Redemption, belly up to the Fiendz merch booth.

Now available on Bandcamp.
Posted by spavid at 4:42 PM

Just fixed the link. Sorry about that folks.

My last re-up request for a while - i promise.