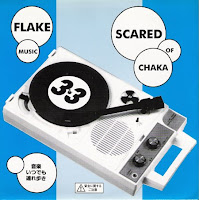 Dare I say this takes the cake as the most "prophetic" 7" single in my entire collection? Though Albuquerque, NM's Scared of Chaka and Flake Music presented themselves as fairly disparate entities at the time, this pairing would be entirely appropriate a few years after it's pressing. Not only would Flake Music eventually take shape as The Shins (free agents as of this writing in case you haven't heard) they contribute a sweetly chimimg slice of guitar-pop here titled none other than "The Shins!" Truth be told, the song would also appear on Flake Music's lone album, When You Land Here, It's Time to Return, but they also cover SOC's "Submarines" here as well, an exclusive track as you might guess.


Things get even more prescient when you factor in Dave 'Yanul' Hernandez, guitarist for the spastic desert-punks in question (think No Control-era Bad Religion meeting the Figgs at a Dickies concert), who would eventually migrate to the Shins as a full-time member once Scared of Chaka called it a day at the turn of the millennium. The Chaka deliver an effective cover of the Flake's "Ponzie," as well as a blistering, yet harmony-laden original, "Shaolin." Gotta love it.

this is great man! thank you! do you have any more flake music? i've got all but a few songs that are ridiculous to find! message me or send an email, thanks!

Hey, I'm searching all over the internet for Flake Music songs. I want to hear Submarines so bad! But the link is broken. Could you e-mail me? flakehunter@outlook.com

Amazing stuff! The link is broken though :(