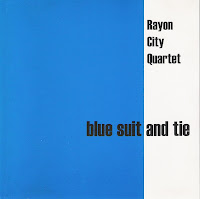 Like icons Big Star, Nashville's Rayon City Quartet play undiluted guitar pop as if country music had nary any effect on their collective home state of Tennessee. The Quartet made their way onto my radar via Not Lame Records praise for this album. Containing guitarist and former Black Crowe Jeff Cease in their lineup, the RCQ have strong inclinations to the likes of Greenberry Woods, Gin Blossoms, Barely Pink, and to a lesser degree, Toad the Wet Sprocket. Brandishing seamless precision and deftly crafted aplomb, the Quartet's modus operendi goes down easy as lemonade, without succumbing to any insipid trappings. I'm not sure if Blue Suit... is their debut, but from what I gather from their Myspace page, another RCQ album, Rock Star is III exists. According to one online source:


The band was a regional favorite headlining and opening for the likes of: Big Star, Smithereens, John Mayer, Jason and The Scorchers, Ben Folds, Marshall Crenshaw and Cheap Trick.


It's unclear if the Quartet is still active.

Their song "Tight" was originally issued on Maki Kobayashi's (Lazy Cat) excellent compilation "What's Up Buttercup?" You can hear it on RCQ's myspace page.

Wow. I actually have this CD. Worked on a used car lot about 12 years ago and the drummer brought us our cleaning supplies. I have to listen to this now.

Oh man...I wrote about this in '99 on bangSheet: " I also confess to being a pig for a song with hooks. I can be lured into something catchy like a junk fiend to a dope den. I liked them Hanson boys singing that "MmmmBop" thing - I admit it. It was damn fine and sugary sweet. I also turn up that song "Torn" by the Aussie soap star girl whenever it graces my radio. It isn't important music, but hell, it gets me man. I don't apologize (if this isn't a roundabout way of doing just that).
The Rayon City Quartet pumped out a song called "Wires and Numbers" on their latest disc blue suit and tie, that is, for all intents and purposes, a blueprint for guitar-based pop songs. It is a Nick Lowe-ish tune that bemoans love in a cyber age, but remains completely sharp, never giving in to cliché or sappiness. It is as fine a pop single as has been recorded in the last decade.
The rest of blue suit and tie is solid. "Wires and Numbers" only kicks things off. The whole thing takes me back. See, I used to drive this '75 VW Camper around in High School. Now, the VW wasn't exactly your typical "stud muscle" car for a 16 year old, but it was all my folks had for me, and there was a certain benefit in driving such a thing. I was already a bit of an "outsider" type, aumI guess weirdo was the label, and the car was just a sort of lame icing on the cake. At least it was in the eyes of the beautiful people at High School.
But, I had this vehicle and a semi-nice mostly cheap car stereo in it. The stereo was hooked up to a pair of old Sony floor stereo speakers that were stored under the fold down back seat/bed (now you're catching on16, weird, stereo, camper/van with a BED). The whole package capped off by the existence of an onboard refrigerator. God, my parent were naďve. Yes, naďve.
Anyhow, I'd actually spend a Saturday afternoon washing this thing for the planned evening. Shorts, no shirt, bucket of suds, I must have looked FINE! Then as evening closed in I'd grab ten bucks from the folks, head over to my friend Vic's and we'd go pick up this lanky freak of a friend, Glen, to buy us beer. Glen had a fake ID and he'd gladly do us the service, and then we'd take him back to his mom's house and drop him off.
Most nights were a repeat of this. Until I got a girlfriend. Then it would be exactly as above, except that she'd be along for the ride. And later in the evening we'd drop Vic off and head out to pull the bed down. Why did her old man ever let her into that camper with me? He wasn't naďve, he was stupid.
The Rayon City Quartet would have fit right in on those nights. I was always looking for and listening to any rock-based, punk influenced music I could get my hands on. The only thing it really needed to catch my ear was a good melody and lyrics that went beyond the usual teen guy/girl slop. The Quartet would have stood up firmly against those early Elvis Costello, Donnie Iris, and Nick Lowe records. Songs like "32nd Avenue", "Sidekick", and "I Could Never" are the type of tunes that serve you well at any point in your life, but they certainly make me wish there was more sharp pop/rock when I was a bit younger. It may have taken the edge off some of those miserable days of youth." Still on point I think

I was in a band called Leslie Road that played around Nashville at the time of this band. My singer and I saw the Rayon City Quartet at the Exit/In in either '98 or '99. We both loved the show and thought our music was so close to theirs. Does anybody know how to get in touch with any of them and/or access their music? I run trivia games all over town and would love to play their stuff for everybody in town. Any help would be appreciated.