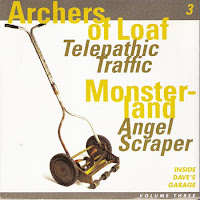 This 45 was part of a split 7" series on the Virgina-based Radiopaque Records, featuring live, in-studio performances at WHFS, a Washington DC radio station. By the time of this release, the Archers of Loaf were well on their way to becoming titans of '90s indie-rawk, but the slow-boiling "Telepathic Traffic" may not be the most convincing evidence of their burgeoning claim to fame. The song actually started life on another single, as a b-side to "Harnessed in Slums." A very thorough Archers discography can be browsed here.


Monsterland have been previously explored on these pages, namely their Loser Friendly and At One With Time eps. The proper studio version of "Angel Scraper" appeared on their lone full length, the feedback-ridden, yet somehow tuneful Destroy What You Love. One of the finest unheralded bands of the '90s, or in fact, ever. Enjoy.

A. Archers of Loaf - Telepathic Traffic
B. Monsterland - Angel Scraper