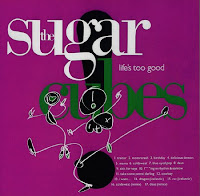 When The Sugarcubes Life's Too Good fell into the hands of a very unsuspecting public in 1988, it was up until that point (and perhaps still is) one of the most radical and esoteric albums ever concocted, for a major label or otherwise. This startlingly offbeat Icelandic quartet, commandeered by a young, waifish singer named Bjork fleshed-out a surreal, indigenous landscape wherein post-post-modern rock was the canvas - one invariably punctured with caterwauls, deflating horns, spicy guitar fills, and alternating English/Icelandic verbage all over the goddamn place. It was an escapist, albeit messy masterpiece for the ages, and one could only wonder what it's gestation period was all about. Now you can hear for yourself.


However shrill and cacophonous you thought Life's Too Good was, try multiplying that by five on these demos. In all seriousness, there's nothing particularly excruciating or grating here, however the audio is on the tinny side - roughly on par with a transistor radio. The tracks were converted from a tape (not mine), and from the sound of it, Dolby (uggh) may have been employed, but even if this is the case it hardly detracts from the lovingly manicured chaos that it is. Early versions of key LTG tracks like "Birthday"and "Coldsweat" appear here, as well as a handful of unreleased tunes, like the busy "Leather" that should have been a contender for the album.

Great band.
More from them here...

Well worth checking out.

Cool. Thanks for the link.

Can you re-upload it, please? Thanks.