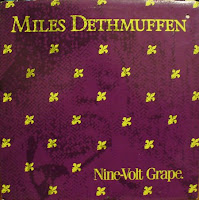 Snatched up this gold nugget at a record show today, having virtually no idea what is was all about. Turns out my gamble paid off, as Miles Dethmuffen is the stuff Wilfully Obscure exists for. A co-ed four piece from Massachusetts, this jangly aggregation must have fit like a glove on college playlists back in the day. Having been schooled in the usual requisites of REM et al, frontman Ad Frank's pipes approximate those of fIREHOSE's Ed "from Ohio" Crawford, thought I strongly suspect this is not deliberate. His chiming fretboard runs, and perhaps that of M/D's other guitarist Kevin Coombs, lean heavily toward Johnny Marr. Trouser Press puts it better than I ever could:

Boston's under-appreciated Miles Dethmuffen proudly wear their skinny-tie new wave influences on their sleeves, to the point of declaring on one song that they "believe in the '80s." Indeed, the four band members are unwavering in their love of happy hooks, jangling melodies and clever wordplay. Produced by Paul Q. Kolderie, the terrific Nine-Volt Grape positively snaps and crackles with no-frills guitar-pop energy, kicking off with the ridiculously upbeat "In Clover." Bassist Linda Bean P. serves as the passionate honest heart to guitarist Ad Frank's terminal wiseacre, as the two swap lead vocals and engage in classic boy/girl-group harmonies. Though it's almost impossible to choose among the record's many witty and pointedly charming songs, standouts include Frank's puckish feminist rallying cry (of sorts), "The Wandering Sexist Rogue Meets Miles Dethmuffen's Fabulous Hammered Dulcimer," the wallflower's lament of "Mike Foley's All Night Party" and the bittersweet relationship-in-crisis melodrama, "Cohabitants."

Hey-How To?
Tutorials for your blog! Rapidshare, Megaupload, Easyshare...
http://hey-howto.blogspot.com

What you said about Miles Dethmuffen (later renamed PermaFrost) being a real powerhouse on Boston college radio indicates that you have superior instincts. I found this blog while googling M.D., since as I am becoming an oldster, I have recently been going through a nostalgia thing for bands who played the Boston club scene in the '80's-'90's. Boston may just be the rulingest (is that a word?) college radio town on the planet, and I've been listening to 'em all for 20+ years (I told ya, I'm old): WZBC, WMBR, WMFO, WERS, even WMLN the little itty bitty Curry College radio station a few miles from my house- they all just rock me to death on a regular basis. (They all stream too, so everyone can share the wealth.) Anyway, M.D. / PermaFrost was a regular fixture on the club scene in the '90's. They're defunct now, but at least half the members are actively working in newer bands (see Ad Frank & The Fast Easy Women). Thanks fer making my day.

Any chance you could repost this?

Miles Dethmuffen back for a short time only