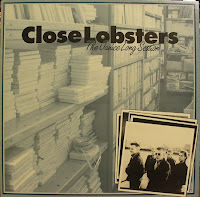 Back in the day at the good 'ol BBC Radio One, I take it there was only so much John Peel to go around. While the vast majority of musical guests taped for exclusive BBC radio sessions were brought in under the wing of the sadly departed Mr. Peel, a handful of performances by acts such as The Mighty Lemon Drops, Danielle Dax, and Scotland's Close Lobsters were handled by one Janice Long. According to her Wikipedia entry, she was fired from "the Beeb" in 1987 for being pregnant and unwed (no joke). She was brought back to the fold in 1999, this time via BBC's Radio 2 outlet.


The Lobsters have been namedropped on these pages numerous times, and had an album (Headache Rhetoric) featured here in August of 2007. To me they were the pinnacle of the British C86 indie rock movement - card-carrying jangle meisters, and proud of it. This session contains a crucial non-lp stunner, "I'm Going to Heaven to See if it Rains." The version here bests it's original single incarnation, and that's no small feat. They may not have realized it at the time, but the Close Lobsters had something pretty colossal to offer. Too bad so few people were listening.

01. Nothing Really Matters
02. Going to Heaven to See if it Rains
03. Pathetic Trivia
04. Never Seen Before
https://www113.zippyshare.com/v/ULA9LjTp/file.html
Posted by spavid at 8:12 PM

Hadn't thought about this one in years. Thanks for reminding me.

Now my Lobster Bisque is complete! Thanks buddy!

One of my all-time favourite bands. They were so unique!

Can you post a new link? Old one's dead

I just fixed the link.

Darn it, link expired :( Is it possible for a new link for this rare find?

Thanks for the updated link! :)

Can you post a non-mp3 version. instead, offer a cd rip in wave format, that would be perfect quality.