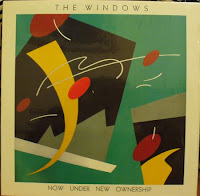 If a picture is worth your proverbial thousand words, then this album sleeve was worth about 100 to me...pennies that is. Intrigued by the gorgeous cover (designed by the decidedly abstract Guy Juke) I took a chance on this rekid a few weeks ago on Ebay, and amazingly wasn't outbid. Why this beaut of a disk (sealed no less) wasn't worth more than a scant $1.00 to any other potential buyer surprises the hell out of me, but anyway...


The Austin, TX based Austin Records clues me in to where The Windows hailed from, but no specific address for the band is provided. Just a stab in the dark, I'll venture this rather spotless trio was from, um, Austin. Very solid, mainstream tilting modern rock/power-pop of the era, with no particular frills or haircuts of note. Can't really picture them playing out with contemporary local yokels The Reivers or Texas Instruments, but the Windows aren't entirely removed from that scene. The band's choice to name themselves after the most common of inanimate objects, coupled with the everyday WASP'y monikers of it's participants makes for something of a Google nightmare, but there's nothing wrong with a good mystery once in awhile.

Nice find for a dollar! Reminds me somewhat of the band The Truth but most likely with better dental work...
By the way-if you do a google search of this band w' the album title, the top responses are your blog.

Hey y'all, I'm the former lead singer-songwriter for The Windows. The band was a platform for my songs, though I would not have gone anywhere without the support of bassist Frank Brothers and drummer David Highfill. Check out www.reverbnation.com/tomharvey for what I'm up to lately. As it happens, I have my first solo CD coming out this winter. After playing in various bands over the years, I've recently devolved to one guy and a guitar, and am having fun writing songs and playing to small crowds. Don't need to get rich or famous, just want to share my songs and connect with an audience. Thank you very much for this interest in The Windows. We were indeed contemporaries of The Reivers, True Believers, Texas Instruments (actually a little earlier) and many others. Our record Now Under New Ownership, was voted Best EP by Austin Chronicle readers in 1985, beating out the Butthole Surfers and Joe King Carrasco. Those were glory days...but life goes on!