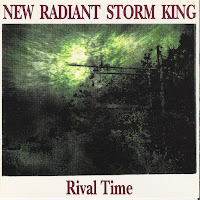 One of the longest-running, but best kept secrets among the indie rawk cognoscenti, Massachusetts New Radiant Storm King have never been consistently thrilling, but their second album, the long out-of-print Rival Time, is the closest they've come to cultivating a masterpiece, however I'm sure there are a few fervent believers out there that would argue that's precisely what this album is. With a sound rooted in the essence of dissonant forebearers Mission of Burma and Sonic Youth, NRSK flirt with minor key melodies and play the dynamic card as if their lives depended on it. Like those legends, The King's modus operandi isn't immediately winsome, but Rival Time was accessible enough for Guided By Voices head honcho Rober Pollard to attest that track two, "The Opposing Engineer (Sleeps Alone)," went a long way in inspiring one of GBV's signature songs, "I Am a Scientist." In fact, Pollard and Co covered "Opposing Engineer" on an ace split single with NRSK in the mid-90s. For me, "Phonecall," a lively but bittersweet number regarding collegiate angst, is the one that really gets my juices flowing.


NRSK's recently reissued debut, My Little Bastard Soul, is even more wiry and fun, but many of the band's later works found them in a much quieter, and frankly un-enthused mode. A solid singles/oddities compilation, Leftover Blues 1991-2003, functions as one of the group's more durable albums, and is just as recommendable as Rival Time itself.

Great background on this band. I picked up Rival Time a few years ago in a dollar bin and couldn't have been more surprised that this band wasn't better known. I'm also partial to 2002's Winter's Kill.

sooooooooo goood! thx for this one, man! Should you have chance to post more NRSK, just go ahead, pls.

Could you please re-up this one man? Can only find Bastard Soul :(

Any chance of a re-up? Much sought-after! Thanks so much!

You rock! Great blog. Can't believe I have not heard so many of these bands. Anyway, if you have any more NRSK, like August Revital and Hurricane Necklace, I won't say no...Thanks dude!

i agree with you.
'phonecall' was one of my favourites.
john peel played both that and 'oil an impatient f~~k'. a great lp.